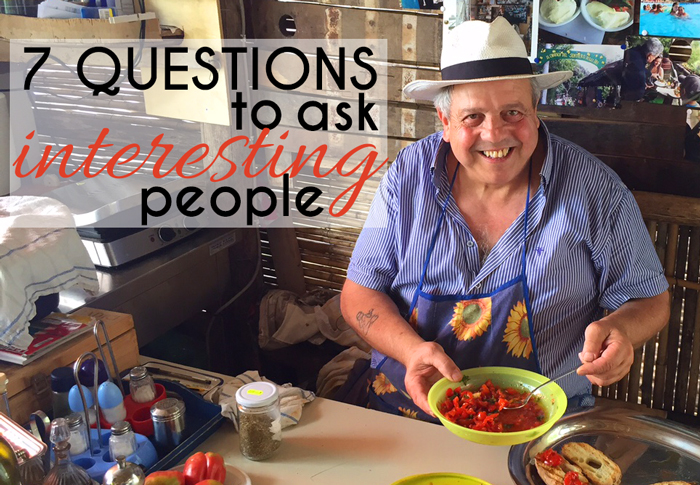 “From everyone, I learn something.” – Unknown

Image caption: A jovial Italian man crafting his organic tomato bruschetta at his little café along The Path of The Gods – 3,000 or so steps above the Mediterranean Sea, en route to Positano. If my Italian was sharper, I would have loved to learn a bit more about the source of that smile!

The Practice of Seeking Out Interesting People

A few weeks ago, in Plovdiv, Bulgaria, Chelsea and I decided to stay in our first hostel in ten years. A few months of global apartment rentals had left us feeling unexpectedly isolated, so we figured we’d mix it up a bit. It turned out to be the perfect remedy – even if we were a decade older than the average guest (but who’s counting?).

The first person we met was a self-taught professional juggler from Iowa, who’d done 300 shows in the Indian circus and was now “backpacking” from India with his full-sized cello. You can’t make this stuff up.

I couldn’t resist spending the next half-hour casually (and excitedly) peppering him with questions.

This has been a favorite practice of mine for more than a decade. And you don’t have to be in a hostel in a 6,000-year-old Bulgarian city to find stories worth investigating. They’re everywhere, if you’re looking.

Anytime I come across someone with a fascinating story, I make a point to take a little time to investigate, whether out of curiosity or for sheer entertainment. And they always seem to have something surprising to teach that I can usually adapt to my own pursuits.

It’s also a simple way to connect, build rapport and make a new friend. You’d be surprised how rarely people get asked thoughtful questions about their life and story, by genuinely interested people. If done with tact (think “engaged conversation,” not interrogation), people often love to share, and will likely be grateful you asked.

Here’s the short list of questions I’ve found to elicit the most interesting and useful answers. They’re simple and generic by design, and aren’t necessarily meant to be used verbatim, but instead serve as topics to be woven into conversation as you see fit (and adapted to your own conversation style).

I don’t usually ask them all, but I’ll start with a couple and see where they lead. Where I put my focus of course depends on whether I’m just simply curious or I’m actually considering pursuing something similar.

Also, these questions assume you’ve already located your interesting person (they really are everywhere!) and have some time to spend with them. If you need help finding such people or breaking the ice, check out A Beginner’s Guide to Anti-Networking: 13 Tools & Articles for Building Real Relationships.

Tip: I stick to open-ended questions as often as possible, since they allow the responder to run wild and give better, deeper answers.

1. How’d you end up doing/being [a professional juggler in the Indian circus]?

Usually asked with excited fascination and a smile. I like starting with this one since it’s an easy opener, it’s fun for people to answer and you have no idea what direction they’ll take. Hopefully it also gets at “Why’d you decide to do it?” – which I’d also cover. It might even turn up a useful strategy for creating some serendipity.

Also meant for them to run with. Hopefully they start to cover what they do and don’t like, and maybe even a wild story or two. Welcome and encourage the crazy stories.

3. How’s it different than you expected?

Search for both good and bad surprises. As outsiders, we can’t possibly know what it’s really like (and humans tend to over-glamorize others’ stories). This also helps get to the answer of “What do you wish you would have known when you started out or done differently along the way?” – which can also be used here.

4. What’s been the hardest part?

Sometimes I’ll lead with “What’s been your favorite (or coolest) part?” to help ease into talking about the tough stuff… which is where all the magic is, and which rarely gets publicized.

5. If you had to choose a totally different career/path, what would it be?

These last few are where you start to get some really interesting data. This question adds a fun twist since it gets to the heart of whether your subject is really doing what they want to do, or if there’s another passion project they’ve been dreaming about. Most people will naturally take a stance that’s consistent with and supports their past decisions and current path – unless we give them permission to talk about something different, without them sounding like they made the wrong choice.

6. If you were starting today, would you do the same thing again? Why or why not?

This is similar to #5, but takes a more direct path. People learn a lot over the course of a career and many might not have started if they knew at the beginning all that was involved. That’s what we want to know.

7. What advice would you give to someone just starting out trying to do what you’re doing?

If you’re considering the same path, this can be priceless (and help avoid face-planting into unnecessary brick walls).

Bonus Question: What was most helpful in making it possible to do what you do?

Use this to uncover any lucky breaks, skills or connections that may have helped them succeed.

The questions aren’t the point – building the habit of noticing what’s interesting and doing something about it is. Connect with fascinating people, listen to their stories, and learn from them – that’s the habit to build. Hopefully the questions will help spur your investigations.

And this practice isn’t just for someone trying to figure out what to do with their life – it’s one that never ends. There’s always something unexpected to learn.

Sometimes your practice will be for pure entertainment and connection. Other times it might send you down a path you’ve been searching for a long time (or keep you from choosing the wrong one!).

It’s just one way to keep following the spark.

And most importantly, it makes things a lot more fun.

Your turn – Go find your own juggler and chat ’em up!

P.S. What questions did I miss? What would you add? Let us know in the comments.

P.P.S. If you live in France, Spain, Portugal or Morocco, and are interested in helping organize a Live Your Legend Local meetup, send me an email or leave a comment. That’s where our world tour is headed for the next few months and we’d love to see you!

Our next event is in Paris, France on July 2nd (with my good friend Leo Babauta of Zen Habits!). RSVP here to join us.