04 Sep The Night Everything Changed & The Power of Human Connection 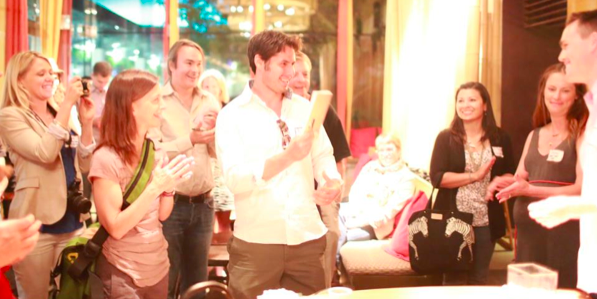 "Never underestimate the power of a small group of committed people to change the world. In fact, it is the only thing that ever has."

For years I've dreamed of being a part of a community that believed in possibility.

A group that believed and acted as if things could be different. A community of people that could inspire and support each other to do work they were truly passionate about and have the impact only they were capable of.

That has always been my deepest purpose for creating Live Your Legend.

At 7:00 PM this community and our movement at Live Your Legend was brought to an entirely new level.

Over 100 of us joined together for the first ever live in-person Live Your Legend event.

While I had expected we'd have a San Francisco-only group, I was inspired to meet people from all over California and beyond. In fact the first person I met, Ben, told me he had just flown in from Seattle. Wow.
Read More

window.location='http://howtoconnectwithanyone.com/joinus/early-access/' “You are the average of the five people you spend the most time with. Make them count.” ― Jim Rohn **Email Reader's: Please click here to read this on Live Your Legend to get free access to what I mention below. Unfortunately you can't access it via...

24 Jul Get Featured on LiveYourLegend! (share your story & win a coaching session or $100 cash): Reader Spotlight

Posted at 17:10h in Announcements, Ask the Reader, Career & Purpose, Life on Your Terms Interviews by Scott 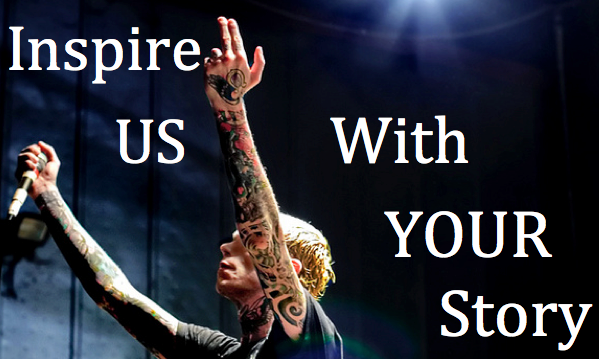 “We don't accomplish anything in this world alone ... and whatever happens is the result of the whole tapestry of one's life and all the weavings of individual threads from one to another that creates something.”

In honor of Live Your Legend's first full year on earth (as of tonight at midnight), and my eigth year helping people do work they love, it's time to step it up a notch. And the only way we can do it is with you. Last week I asked you how we could take this community to a new level. How we could bring us all together to inspire, help and support each other to Live Our Legends. Your responses nearly put me to tears - both in your praise and your ideas. The most invigorating ideas included:
Read More

Posted at 09:01h in Announcements, Entrepreneurship by Scott

"We rule out the possibility of great change, because it doesn’t seem realistic..."

In honor of Chris Guillebeau's latest book, The $100 Startup, today I want to talk a little about Possibility and the question of "Why Not?" But to start...

The Death of the 'Risky' Startup

There was a time not long ago when turning an idea into a business required a massive investment. Less than a decade ago the cost of building a passion into a career required significant risk. It may have meant leveraging your home, your bank account and maybe even some close relationships, to drum up the seed capital and support. For many it meant hundreds of thousands of dollars worth of loans. Or even taking on investors and giving up a large slice of your dream, in exchange for the millions needed just to get it off the ground. And that's assuming the passion-based business was even possible - which 30 years ago, was likely not the case. The risks used to be enough to get almost anyone saying "there's no f*#%ing" way. They got so high as to convince the world that living someone else's dream (or no one's at all) was the way life was going to be. But that was then...
Read More

Posted at 05:37h in Announcements, Career & Purpose, Entrepreneurship by Scott 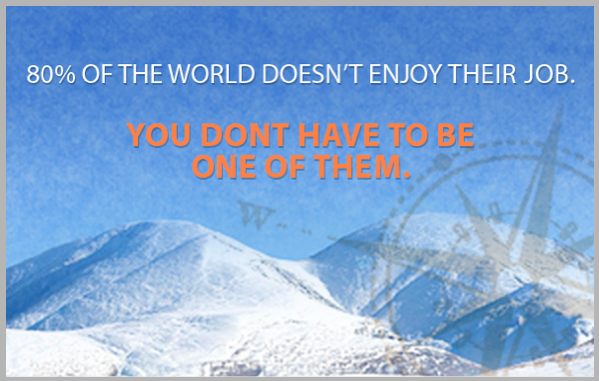 "Nothing is more powerful than an idea whose time has come."

**Urgent Announcement: Today is the official launch of Version 2.0 of Live Off Your Passion: A award-winning career course to help you find passion and build a career around work you love. Over 700 changes, big and small, and a redesigned 72-page workbook. Can't wait to see what you think! Check out all the details plus a couple fun v2.0 bonuses here. *****

Lessons from Creating the #1 Personal Development Product of 2011

I want to start by saying THANK YOU! To all you massively passionate and loyal readers, supporters and those of you who have purchased Live Off Your Passion in the past few months. Somehow, thanks to all of you, Live Off Your Passion was voted The #1 Personal Development Product of 2011!! Wow! Seriously, I was blown away to hear this. I didn't even know it was being considered until I heard the big news. And the only reason it happened was because of all you. The contest was held by Steve Aitchison of Change Your Thoughts, where over 20,000 people from around the world were asked to nominate and then cast their vote. Seriously, thank you! I poured my heart and soul into this course (as you likely saw from the surveys, product checklists and all else). The project technically started about 6 months ago but in reality it began nearly 8 years ago...
Read More

07 Feb The Final (and most crucial) Single Step to Profiting from Your Blog (hint: it has nothing to do with the web)

Posted at 12:58h in Announcements, Career & Purpose, Entrepreneurship by Scott

“You are the average of the five people you spend the most time with.” ― E. James Rohn (Jim Rohn) *Note: This week marks the final part to our "Monetizing Your Passion Online" series. I can't believe how much fun feedback I've gotten on these few posts....

Posted at 01:38h in Announcements, Entrepreneurship, Free Guides by Scott

"A hobby is just a hobby unit you make a sale. Then it's a business." ~Anonymous

*Note: This is the second article in the “Monetizing Your Passion Online” series I’m running for the next few weeks. Enjoy *****

Now on to the good stuff - exactly how this site makes money...

At the beginning of last year I had a goal of making $1,000 from Live Your Legend in one 30-day period by the end of 2011. It seemed like a pretty ambitious goal at the time. But that's not quite how it turned out… Instead, by the end of 2011 this website had made enough money to support a pretty nice existence in San Francisco. That works out to a bit more than 1k a month... The full details of how I did it are in the next few thousand words.
Read More

Posted at 10:08h in Announcements, Entrepreneurship by Scott

"You are 100% in control of what you learn and how good you become at something. No one can take that from you."

Recently I had dinner with Tim Ferriss and a few other entrepreneurs in San Francisco. One of them was Michael Ellsberg, who just published a new book The Education of Millionaires. He also recently wrote a killer article article on Tim's blog, 8 Steps to Getting What You Want… Without Formal Credentials, that's very worth the read. I absolutely love these nights. They get me shaking with ideas and possibility. At a table like that, nothing is impossible. Spending time with these guys got me thinking. There is one thing that, above all others, ensures that you are able to find and do work you love everyday. And it's something quite easy and totally within your control (p.s. that combo is incredibly rare, so listen up). Whether it's Tim, Michael, Tony Robbins or any of the other Living Legends I've spent time with over the years, there is one thing they do every day without fail. One single thing guarantees their success and makes passionate work the only option.

They learn everything they freaking can.
Read More

15 Nov The Live Off Your Passion eCourse is Officially Live!

Posted at 06:55h in Announcements, Career & Purpose by Scott

Today is a huge day. I've literally been waiting for this for months (actually, probably longer). Because today we're introducing...

The first eCourse of its kind to combine the Art of discovering your PASSION with the Science of Making Money from it.

The Live Off Your Passion eCourse officially launched today at 7am PST. Visit the launch page and let me know what you think! *Update: Hundreds of people have already purchased the course. I've received dozens upon dozens of really amazing emails from buyers and some of them have been awesome enough to leave their thoughts in the comments at the bottom of this post. Check them out. It's humbling to see how much this is already starting to help people. It's the kind of thing I used to dream of and I'm so excited to finally have it for all you to experience.

After last week's pre-launch I got some awesome feedback. Since I build what you tell me to, I love hearing from you guys. One consistent suggestion after seeing the course last week, was to include more content directly geared towards people in the corporate world who don't plan to quit and spin off on their own. Well I have more exciting news! Not only do we now have an Expert Interview from Pam Slim of Escape from Cubicle Nation, but I also wrote an additional mini eBook totally free to those who purchase the course, that's dedicated to finding passion in the corporate world. It covers everything from finding passion in your current role (no matter how brutal it is) to the most effective ways to approach a passion-driven job hunt. Read more about it here. Consider that a little bonus from me ;)
Read More