Posted at 11:45h in Career & Purpose, Entrepreneurship, Life on Your Terms Interviews, Self-Guided Education by Scott 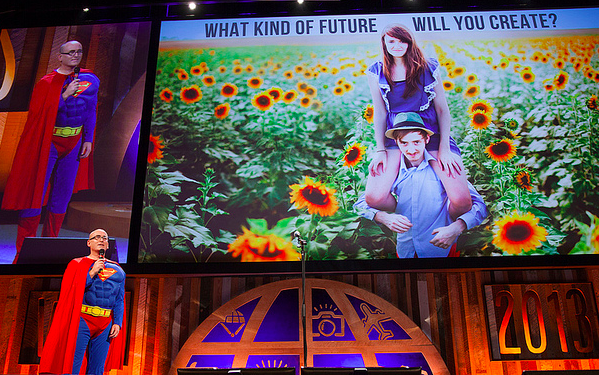 "Notice the sparks. Follow them. The next big thing may be the small thing right in front of you." - Darren Rowse

Rule #1: Put All the Crazy People in the Same Room (or River)

Last Friday morning Chelsea and I grabbed some fresh Portland coffee, walked down to the Willamette River, stripped down to a bikini and board shorts (I was in the shorts) and hopped in a couple inner tubes with about 618 other friendly folks. A few minutes later we broke the Guinness World Record for creating the longest human floating chain (old record was 542 in Viareggio, Italy in 2008). Hat tip to Tyler of Advanced Riskology for orchestrating the seemingly impossible feat. It was fitting that the first official event of the World Domination Summit involved hundreds of people sloshing around in a river for a few hours wearing next to nothing. Something tells me that little vulnerability exercise wasn't a coincidence. Also wasn't a bad way to meet a few new friends. And it set the perfect tone. For those of you unfamiliar, WDS is an annual gathering put on by Chris Guillebeau of The Art of Non Conformity. The event's core theme is "How do we lead a remarkable life in a conventional world?" This year 3,000 people from 30+ countries descended on Portland, Oregon to share in that vision. Their stories were proof of what's possible.
Read More

Posted at 09:56h in Announcements, Communication & Rapport, Entrepreneurship by Scott

The Path to Practical Expert… When it comes to doing work you love, your personal brand is everything. In order to get paid to help people in a way that's fun and exciting, people must see you as the expert. They must trust that you can...

Posted at 12:41h in Career & Purpose, Entrepreneurship, Life on Your Terms Interviews by Scott

"People used to tell me life was short. One day I finally realized they were right. But by then it was too late." - A man who wishes he would have listened **** Meetup Update: We have a few casual LYL meetups happening around the world this week. Please...

Growing A Community Around Your Own Cause...

We've been talking a lot about the power of community in the past few weeks - both our community at Live Your Legend as well as the fundamental importance of the people in your own town. To take that a step further, today I want to give some very specific tools for growing your own online community around a cause you believe in. And it comes in the form of a special treat for you all - an insider's look into the workings of LYL. Whether you're currently building a career around your passions and the impact you want to make, or you're working towards getting there, building an online community is a huge part of making it possible. After all, nothing at LYL would exist without you all. So to teach us all a few things, I want to introduce you to my friend Derek Halpern. His site, Social Triggers, is dedicated to helping entrepreneurs use proven psychological principles to grow their business and communities. And he's damn good at it. In under two years he grew Social Triggers from 0 followers to a community of over 100,000 fans.
Read More 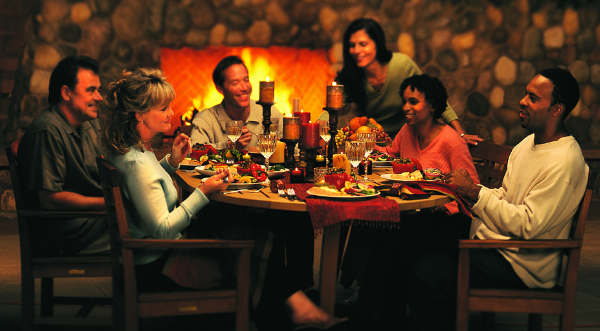 "The first step toward success is taken when you refuse to be a captive of the environment in which you first find yourself."

Today's post goes hand-in-hand with our online presentation on: How to Find & Meet Inspiring, Passionate & Supportive People In Your Hometown. You can see the recording here.

Is Your Community Helping or Hurting You?

The goal of Live Your Legend is to provide the ideal environment and resources for making your impact on the world. Everything we do is to serve that purpose for you all. By now we should all know that the people around us shape who we are. They will either mold you to change the world or cause the world to collapse on your shoulders. In order to do anything meaningful - be it lose 50 pounds, run your first marathon, or do the work and make the impact only you are capable of making, you must have a support network that helps make it possible. So I want to challenge you to ask what may turn out to be some hard questions.
Read More

"Life is nothing more than a series of experiments. Test and share you ideas. Give them a chance to have an impact, and an impact you'll have."

Important Note & Warning: This is a special post — a manifesto and guide on experimentation & learning. It's in-depth and it's important. The whole thing will take you about 15 minutes to read and another 15 minutes to implement. I believe it will dramatically transform your career potential. That's exactly what it did for me. If you must, you can scan over the first part. But the next 9 steps are vital. I spent a lot of time making this as directly useful as possible. Please do something with it. I meant to write it a year ago. It's about time ...

Stacking the Deck in Your Favor & The Power of Feedback Loops

Just under seven years ago, I discovered a tool that completely transformed my career and ability to impact the world. It became the vehicle that allowed me to have the impact, lifestyle and experiences that I only used to encounter in the occasional book, movie or dream. And it took me four years to realize I'd found it. Without it, Live Your Legend wouldn't have a chance at existing.
Read More

16 Apr Fearful Focus: How & When to Kill Your 2nd Most Amazing Idea (+ free ‘Avoid At All Cost’ workbook)

"Focus is the key to the world."

- William A. Dinsmore III (my dad)

I have a confession to make. For the last few months I've been working on launching a top-secret project that I think could help this community in a totally new and fun way. I've briefly mentioned it in the past, and many of you have showed serious enthusiasm - which further fueled my distraction, I mean excitement... This is also what I was referring to in my interview with John Lusk on Difficult Decisions last week - so figured it's about time we make it public. To recap, here's the first item from my 2013 goals post:

"Launch a real-time fully-exposed case study on how to take a physical product from idea, to market testing, to manufacturing and to selling — all by using today’s online tools. This is going to be our biggest project EVER, and we are going to take you along for every step of the ride. Keep an ear out for the launch of the new site to track this project as well as what the physical product will actually be. I could not sleep this weekend because I was so excited for it."

Since then, my partner Nic and I have invested a few thousand dollars in branding, design, setting up web sites, and even hired an architectural designer to create high-end CAD drawings so we can manufacture our first physical product prototype.

What's the top-secret product you ask??

Posted at 23:13h in Emotions & Happiness, Entrepreneurship, Life on Your Terms Interviews by Scott

“Choices are the hinges of destiny.” – Pythagoras

Today I'm going to share a true story with you that you couldn't make up if you tried. But first a little background...

The Money or Your Life?

It's the age old question. And the crazy thing is, you used to actually have to make that choice. Today it's a little different. John Lusk is perfect proof. In 1997 John started at Wharton Business School, one of the most prestigious finance schools in the country. On his first day, he and five friends swore to each other they'd become entrepreneurs instead of the typical investment bankers and consultants that their school was known for producing. Easier said than done... When John graduated in 1999, it was the heart and height of the dot-com blow out. His friends were becoming paper multi-millionaires right and left, and banks were offering $1 million signing bonuses to keep up.
Read More

09 Apr 197 Passion Projects & 6 Ways We Can Change the World Together: LYL Reader Spotlight #5

Posted at 08:55h in Entrepreneurship, Life on Your Terms Interviews by Scott

"We ask ourselves, 'Who am I to be brilliant, gorgeous, talented, fabulous?' Actually, who are you not to be? Your playing small does not serve the world. And as we let our own light shine, we unconsciously give other people permission to do the same." —Marianne Williamson, abridged

Who Do You Inspire?

It's a question we all too often forget to ask ourselves. Take a few seconds to answer it. One thing I promise you is that there are people out there who look to you to help them find their way. They admire something (if not everything) about how you live your life. This is a responsibility we all share. Once we realize this, the real question becomes: What type of life am I going to live to take my responsibility seriously? So today is about you. Last week 197 of you told us your Passion Projects - and what you're doing to Live Your Own Legends. You showed us how you plan to help and inspire those around you. And I was blown away, as I am any time I interact with our community. I could not have asked for a better birthday present. Thank you for sharing with us - the 31 winners of The Alchemist will be contacted shortly. The crazy thing is as of this morning there are 34,420 of us in this community - all with a Passion Project dying to be set free on the world. Imagine the impact that could cause.
Read More

Posted at 23:51h in Career & Purpose, Entrepreneurship, Productivity by Scott 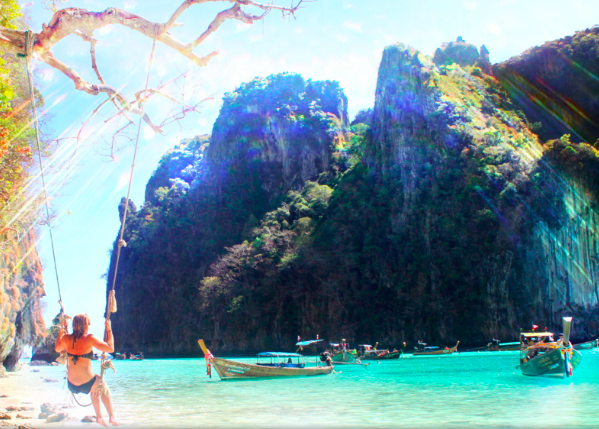 "The biggest risk is doing nothing."

After last week's post on Creating More & Consuming Less, I noticed one very common response. It's actually become a bit of a broken record over the past few years.

It all boils down to one word: Risk

"Thanks for the inspiration to get me creating things and doing work I love. But my situation is different. There's just too much at stake to take that kind of a risk right now. I'm not some carefree single 23-year-old. I have too much to lose. Plus I don't think I'm quite ready to start creating."

Their excuses go on...

The thing is these are all still excuses.

And after reading The Alchemist for the 7th time while in a jungle lodge in Northern Thailand last week (I reread it on most international trips), the topic of finding reasons to put off dreams could not be more front of my mind. In fact the name Live Your Legend was a direct result of reading the book while fly fishing in Patagonia a few years ago. You see, the only difference between the people who do something meaningful and the ones who sit in complacency as another 20 years go by is simple.
Read More