I’m Going Off the Grid: Therapy for an Addicted & Over-Connected World 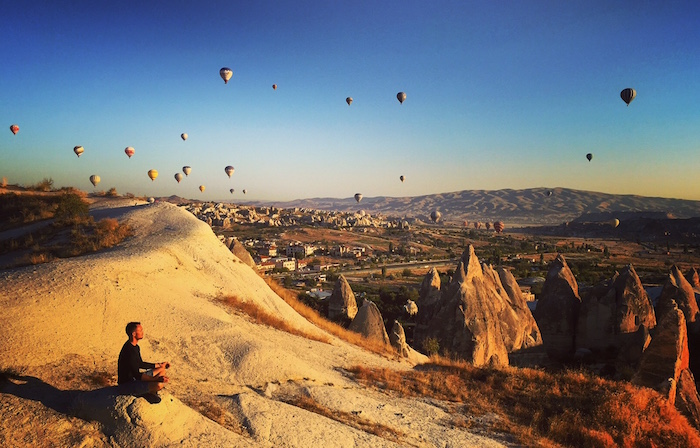 04 Sep I’m Going Off the Grid: Therapy for an Addicted & Over-Connected World

Note: For the next two weeks I’m taking my first digital sabbatical (in five years!) as I head to Tanzania to attempt to climb Mt. Kilimanjaro, track the Great Wildebeest Migration and do some volunteer work at a local school and orphanage.

But before I go off the grid, I’d like to explain why it’s so important (for all of us), and offer up a challenge while I’m gone. It’s a scary topic and I’ve been wanting to cover it for a long time…

Last week Chelsea and I spent a few days in Dubrovnik, Croatia celebrating our five-year wedding anniversary, in the same hotel we’d stayed in during our honeymoon.

Being there reminded me of something. During our honeymoon we were totally off the grid. No computers, phones, wifi, social media, nothing. It was perfect.

And with the exception of a fishing trip I took with my father in eastern Russia a couple years ago, I don’t think I’ve had a day since where I haven’t been connected in some way. And certainly not for a week or more straight.

For the past five years, I’ve been connected non-stop.

I see that as a problem. And today I’ve decided to do something about it.

Ever since starting Live Your Legend, the Internet and I have been joined at the hip.

No matter what I’ve done or where I’ve traveled, for the past four years since LYL was born, I’ve written and sent out an article every week (along with everything else that comes with running the business).

I’m incredibly proud and in awe of what that weekly creation habit has allowed me to produce – millions of words and hundreds of articles, including every single week of this year’s world tour (See our most popular articles and the full archives here).

But I also think this creates an unfair impression and expectation – for myself and for all of you.

I don’t want to reinforce and encourage that. Always being connected and “on” is not a good thing. It’s not productive, it’s not healthy and it’s certainly not the way to offer your best ideas and work out to the world.

That’s what I’ve realized. We don’t turn off because we’re terrified of missing out on something. We’re addicted to the digital connection high, and its endless little dopamine hits (that same sneaky chemical fired by drugs, alcohol and many other destructive addictions). It’s no surprise that various forms of tech addiction are starting to be considered legitimate psychological conditions.

But even more than that, we’re simply afraid.

Well, at least I know I have been.

That’s the best reason I’ve come up with for why I haven’t properly disconnected for the past five years.

I’m afraid of what you might think. That the community I’ve spent so much of the past years of my life building and cultivating, might lose interest.

If I take a week or two and don’t publish a new article, will you think I’ve given up? That I don’t care about our community? That I’m lazy?

Sounds stupid, I know. A couple weeks could pass and no one might know the difference. But this is the story I’ve told myself.

And from the conversations and research I’ve done, I think a lot of us operate off a similar script, often without consciously knowing it.

I have all kinds of friends with big shot jobs and titles who make much more money than they need and have weeks of vacation days accumulated, but they’re too busy to take them. At the end of the year, they expire – unused. But feeling like you’re too busy to take time for yourself and those you love is good for no one.

I almost decided not to book this Tanzania trip because I didn’t think I could (or should) step away. How ridiculous is that? To pass up an adventure I’ve talked about for years – because I’d convinced myself I couldn’t disconnect. Or more truthfully, because I couldn’t find the courage to do it.

That would have been a tragedy.

I also know how priceless The Pause is.

That’s where all my best ideas have come from. World travel made me an entrepreneur.

But the ease of access to email and social media have made the gap all but disappear. We arrive five minutes early and instead of looking around, taking in the scene or saying hello to someone new, we pull out our phone and habitually, obsessively, check a news feed or how many likes your last post got.

Or worse, your date gets up from the dinner table to use the bathroom and you quickly check a few more updates, without even thinking how he or she might feel when they walk back to the table and notice you quickly stuff your phone back into your pocket.

That feels like shit, and I’ve been guilty a lot.

The pause is disappearing. That priceless space that allows us to think big, to reflect, to plan, to create – it’s becoming harder and harder to find. Which means our responsibility to save it is greater than ever.

You used to be able to go on vacation to find it. But today’s vacation for most is nothing more than a glorified telecommute.

I’m endlessly grateful that technology allows a year like this to be possible. For me to run a business, do my work and have the opportunity to help people from nearly anywhere in the world. But it’s not some perma-vacation. Sure, some days it feels like a holiday, but there are at least 1–2 nights a week where I’m up until 2 or even 4am working, and many of my days in cool foreign cities are spent somewhere inside – wherever I can find the fastest (least slow) Internet.

I wrote the first draft of this article last week from an 80-person village in the mountains of Montenegro. Now I’m finalizing it from our room in a legitimate rock cave in Cappadocia, in the desert, in the center of Turkey (Google it and see above picture – crazy place!).

And guess what? Their wifi is about as fast as it was in most of Europe. That’s amazing. But it also means I’ve been on my computer and phone a lot more than I’d like to admit.

I feel like a damn addict as I immediately measure the speed when I see a new signal. But perhaps that’s a more fitting description than I’ve let on.

I’m not complaining. I’m just calling attention to something we all need to be aware of, and make a conscious consistent effort to do something about it.

Always being reachable is not something to be proud of. It causes us to hold ourselves to this ridiculous, unfair and unhealthy standard. It builds microscopic attention spans and trains reactive behavior over proactive.

Reclaiming that gap, the priceless pause, the space that allows great ideas to take life, is an important practice. And today, with how seamless it is to constantly be connected, it’s even more important of us to be vigilant about it.

To pick times where technology gets locked up.

To digitally disconnect so that we can connect with the people, things and ideas that are right in front of us in the real world.

We all know how important it is to spend time with people we love, yet we constantly sacrifice what should be so sacred, out of fear of missing a beat (or tweet). Society trains us to always be on and gives us the tools, technology, apps and devices to fuel the addiction. It’s like asking a recovering alcoholic to live in a dive bar.

It has become almost impossible to escape, unless you decide to take your own stand.

It’s on us to step outside. To play, explore and be with the people standing next to you.

So I’m going off the grid.

In a few days I’ll land in Tanzania – I will be fully offline for at least a week, and will be taking a pause from daily work and writing new articles for two (there’s thankfully no wifi on Kilimanjaro, although apparently you can get cell service from a rock at 16,000 feet, which I will not be visiting!). The LYL team will still handle emails and customer service as usual, but I will be off the grid.

This climb also aligns with the second pillar of the LYL Passionate Work Framework of Doing Your Own Impossible.

Each year I try to attempt at least one significant physical challenge, to see what’s possible. While I’ve done much longer distance events, such a 50-mile foot race, I’ve never attempted something with this duration or altitude (over 19,000 ft.), which adds an entirely new dimension.

And the fact that it also forces me to digitally disconnect makes this somewhat of a double challenge.

You might be thinking how ridiculous it is for me to talk about “going off the grid” during a year trip around the world. And my response is that’s all the more reason to make a point of this. This is really important – for all of us.

And I plan to make these sabbaticals more of a routine part of my work schedule going forward – likely a couple times a year. (Thanks to my friend James Clear for his example.)

Because this space is what allows me to show up and do my best work for all of you, myself and the world.

My challenge to you is simple – find a way to disconnect over the next couple weeks.

You get to make the rules. I’m not talking about suddenly going dark for a week or two. I realize that takes planning, so do whatever makes sense for you.

Here are a few ideas:

And start with this short viral video to inspire your pause…

I realize the irony in suggesting a viral video to kick off your pause, but whether you’ve seen it already or not, I’d take a few minutes to watch it now. It’s called “Look Up” and has been seen more than 50 million times. It has a powerful way of communicating the message, and is performed by a talented spoken-word poet. I think it’s fantastic, and gives me chills every time…

It’s an absolute honor and privilege to get to write, create and share my ideas with you and the world each week.

To have you here to read and hopefully go out and put them to use is something I could have never imagined. I do not take that responsibility lightly and I look forward to diving back into it with a fresh mind in a few weeks.

Until then, I hope you’ll join me in taking a stand for yourself and those close to you. Get out, play, explore and watch what comes of it.

No one else is going to do it for you.

Give life to the pause, and the pause will offer you even more in return.

See you in a few weeks,

P.S. Soon after I’m back, we’ll be launching our next Start a Blog and Dream Job Writing Challenge, so we can all share what we learned during our newfound space. Get ready!