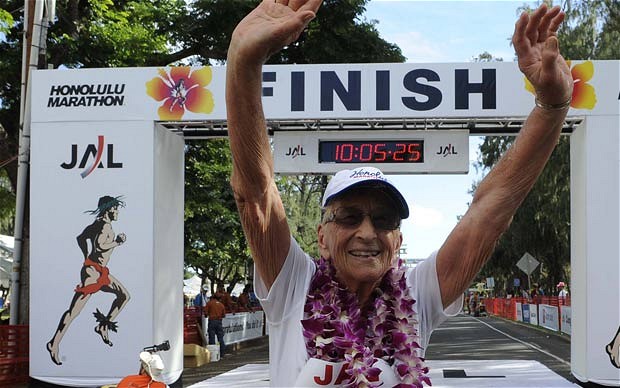 “I once did something impossible. Since then, it’s been easy.”

~A kid who didn’t know any better…

Yesterday morning I swam from Alcatraz to San Francisco.

Just before jumping in, I sat on the boat a little nervous. The water was about 55 degrees and we had around 1.4 miles to swim.

My friend Jonathan gave me a couple words of encouragement and then he jumped in. I suddenly felt a bit more at ease.

Jonathan is 13 years old. This is his third year doing the swim. And the next day he swam across the Golden Gate bridge. Of the 75 people swimming, about 50 were between 9 and 13 years old.

The goal of the event is simple: escape limitations and expand what’s possible.

When you escape from Alcatraz at 11 years old, your reality suddenly starts to change.

Think of how differently you would have approached life if you had swam 1.4 miles across the 50-degree San Francisco Bay before turning 12? Seriously take a minute and think about that. How many invitations and challenges would you have said yes to? What things would you have tried (and likely accomplished)? Would you be where you are right now? Would you be working a job you didn’t love or complaining about a body you weren’t proud of?

I would have been wrong.

I hear things all the time that seem unreal. We all do. But I’ve seen too many ‘miracles’ happen to take them for granted. Now my natural reaction to impossible suggestions is to find out rather than assume.

As a child I thought a two-hour hike was all I had in me until my parents sent me to a 14-day Outward Bound. I used to think I couldn’t go a meal without meat until I went vegan for a week – I now eat 90% plants. I used to think an ultramarathon was beyond me, until I tried. I used to think it was impossible to make a living blogging, until I became friends with the guys doing it.

The easiest things to witness are physical feats. Our minds like things with clear finish lines and race times that we can witness with our own eyes.

Granted, the biggest life accomplishments aren’t as easy for spectators to see–marrying your soulmate, having a child, building your dream business or having five friends who would do anything for you. These take time for outsiders to notice. I do my best to constantly spend time around these people both to expand my own limits and to document their stories for all of you.

The more people we can see living their dreams and doing the impossible, the more likely we are to attempt them. If the ten people I spend most my time around have sucessful lifestyle businesses, then all of a sudden that feels like the norm. It becomes possible. We are the average of our peer group.

For starters, go out this weekend and witness someone doing something you would have bet against. A foot race is the easiest place to look. They happen in most towns almost every weekend. Ideally find a marathon (since most people think they could never run one–a half or 10k will also do). Go to the finish line about 3 hours after the race starts. Bring a sandwich and find a comfortable spot to sit. Have nowhere to go. Plan to spend a couple hours. Just watch the people crossing the finish line. Notice their shape, size and age–You’ll see all sorts. Notice the look on their face. Take it in. How are they so different from you?

Go do the impossible…for you

Impossible doesn’t have to be something stupid and crazy that the world has never seen. Maybe later you’ll go for things like that, but for now all it needs to be is unchartered land for you.

Find something this week and do it. Something you’ve never done before.

Pick something small. If you’ve never run more than two miles, then go run a 5k. Don’t make a huge deal of it. Just start running. Walk a bit if you need to. Pick something you haven’t done (and maybe told yourself you couldn’t) but know you could if someone had a gun to your head (we can do almost anything given the right incentive…).

Other ideas could be giving a speech (you can drop into any Toastmasters for free), eating only vegetables for a week or writing the first chapter in your book. It doesn’t have to be physical (but that’s my favorite place to start).

Why haven’t you ever done it? Your mind never really knows something’s possible until it’s actually accomplished. But once that happens (and the more it happens), you’ll start to see things a little differently. Then a lot differently… Instead of looking for excuses you’ll find reasons. You’ll start to try more. Which means you’ll start to do more.

Limiting beliefs thrive off inaction. The more you do and try, the more empowering your beliefs will become.

Your confidence will snowball.

Make it a routine to test the impossible

Push limits. Try new things. Get outside your comfort zone.

You’ve heard them all before. Go out and do your impossible. Simple as that. Before long you’ll be addicted…and unstoppable.

Your mind will never know you can do something until you actually do it. Do it enough and you’ll give it permission to run like crazy. If you can swim from Alcatraz at 10, then who’s to say you can’t start a business at 14? No one. Except for the ones who never tried.

The only difference between those who cross the finish line and those who never start comes down to one word: Will.

As I dried off after the swim, I watched some of the other kids finishing. I saw a boy take his last stroke into shore as two people ran up and helped him out. His legs were dragging. Something looked wrong. Really wrong.

Then they plopped him down in is wheelchair. He victoriously put his fists in the air.

I’d seen him earlier that morning. I just didn’t think he planned to get in the water. Wrong assumption.

Most the stuff you think you can’t do, you can. Better to find out than go through life assuming the worst.

Give it a try. I bet you’ll be surprised.

Do something you’ve never done and leave a message in the comments below. Tell us your story of impossible or your attempt. 1,000’s of people read this site every day who never comment. Add to the community. We all appreciate it.