Are You Scared or Are You Just Selfish? 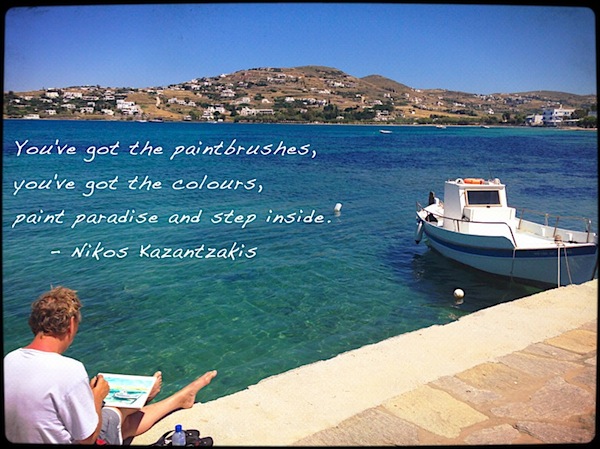 03 Jul Are You Scared or Are You Just Selfish?

Confronting the Selfishness in Fear

One of the promises I’ve made with all of you as members of our revolution is to tell it like it is and give full disclosure about what it’s like to pursue work that matters, warts and all. Anything else would be a disservice. So today, let’s talk about being selfish.

Fear keeps me from a lot of things.

And judging by the comments and emails I get from all of you, it sounds like I’m not alone.

Fear is selfish. Being scared is being self-centered.

After years of watching myself put something off or talk myself out of taking action, I find that if I peel off enough layers, fear is always the source of the wheel spinning.

Depending on the project (and the day), I might be scared that I won’t be able to figure it out, I’ll look like an idiot, people will laugh at me, I’ll lose credibility, I’ll be called a hypocrite or a fraud, I’ll lose money, I’ll realize I’m not smart enough, and so on. I have these and countless other panicked feelings all the time. Sometimes they’re lingering in the background, hardly noticeable. And other times they seem to put me in a straightjacket.

Most the time nobody really notices, which is often the hardest part. You look at the work someone creates, and for the most part, the signs of fear have been ironed out – unless, of course, it’s the topic of discussion, like today. 😉

Every major project I’ve worked on, while exciting to produce, was also riddled with fear and uncertainty, especially in the beginning.

I froze for a whole day when I first sat down to create Live Off Your Passion, staring alone at my screen and wandering the beach aimlessly for hours during my so-called “writing” retreat.

I psyched myself out for nearly nine months before taking even one step in creating our Connect With Anyone Course and community.

It took me four hours to film my first 90-second video when I launched Live Your Legend. It was on my mind for weeks leading up to it – almost constantly. I’ve kept it live on this page just on principle.

And don’t get me started on the days leading up to the TEDx talk I was invited to give six days before the event.

But two months ago, I had probably the most beautiful display of terror and irony in the history of Scott Dinsmore. I launched a workshop on The First Steps to (Finally!) Doing Work You Love. You all asked for it and I thought it would be so obvious to create. Yet in the week leading up to it, I almost canceled the whole effing thing because I could not distill my research into something that actually made sense. It was pathetic and totally unexpected. I couldn’t figure out the first step to take in creating the damn First Steps Workshop!! Impressive, eh??

(For those of you who attended, thanks for the support. And for those of you who didn’t, here’s the access page to the full First Steps Workshop recording, 30-day action plan and workbook. When all the dust settled, I was really excited about how things finally turned out. I’ll be hosting a live follow-up attendee Q&A session in a couple weeks.)

That’s the interesting part – these projects have turned into the most significant and and impactful work I’ve ever produced.

They are the core of our LYL movement and the foundation of my business and livelihood. And you guys tell me they’ve helped you in ways I could have never scripted. Recently thirty of our CWA alumni sent me the most heartfelt thank you I’ve ever gotten – a DVD montage and hand-crafted journal of stories and thank-you messages that brought me to tears.

And I almost said no to every one of those projects – because I was scared.

And that is why fear is selfish.

Maybe you’re scared to start the new diet or workout plan because it might be too hard or you might fall off the wagon. But what kind of person could you be to the people around you if you lost the weight, gained the energy and had the confidence that came from it? Or what kind of grandfather will you not be if you die a decade before you have to?

You might be scared of how long it will take to learn guitar or the laughter that might come at the first open mic. But what about the way your music could eventually move people?

You have a talent you know could help people, but it lies buried inside because you’re not sure what to do first or you’re afraid of what others will think. What type of potential could that shared talent and passion allow others to experience?

We’re so wrapped up in ourselves that we sell the rest of the world short.

Jim Carrey delivered a line in his recent commencement speech at the Maharishi University of Management that seems fitting:

“You can fail at what you don’t want, so you might as well take a chance on doing what you love.”

In the lifetime picture, the risk of not pursuing what matters will always dwarf the fear of seeing what could be possible. It’s rarely clear while you’re staring at your first blank canvas or trembling as you try to eke out something new, but I have a feeling it will be painfully obvious when sitting in a rocking chair when you’re eighty. That’s real risk.

The people who make a difference don’t act because there is no fear.

They act in spite of it.

What have you been depriving the world of? When will you stop being so freakin’ selfish?

It’s a question I have to remind myself of almost daily. Something tells me I’m not alone.

Many of you hopefully already know this, but one of the most effective ways to act in spite of the fear is to hang around the people doing the things that make most of us quiver. Find a community of people who “get you” – who believe in the same type of possibility and who have your back no matter what.

That’s why we created our How to Connect With Anyone course and community. We only open it 2-3 times a year to a small group of dedicated people, and the next opening is in a few weeks. If you want to surround yourself with the people who refuse to let you fail, I bet CWA can help. You can learn more or jump on the early access wait list here. More details soon.

****
This post was inspired by my wife (AKA Chief Balance Officer) Chelsea and my long-time coach Debra Russell, who both seem to always know how to stick it to me in just the right ways. Thank you.

Image credit: A painter we stumbled across in Paros, Greece