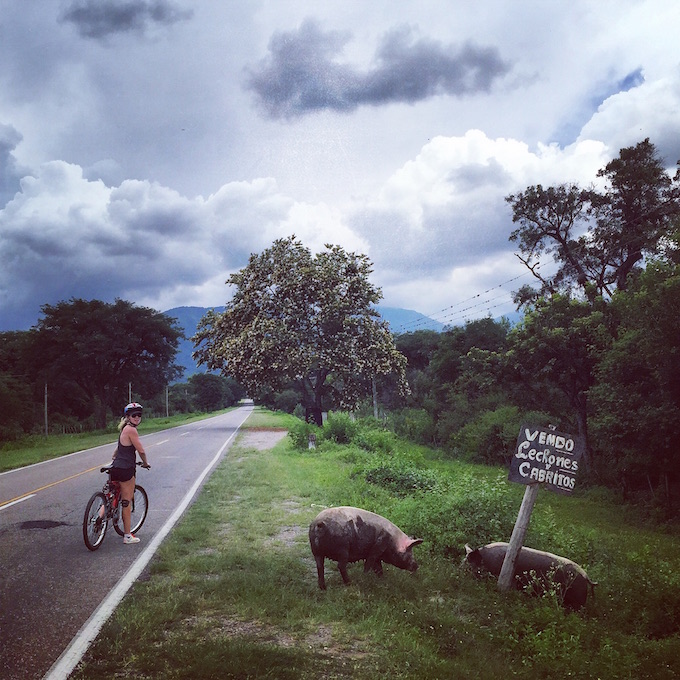 Memorable Moment(s): Unexpected mountain-top spin classes and Argentinian dinner parties that last from 4pm to 3am. Oh, and when Chelsea walked into a nice hotel in the center of downtown Salta and, in Spanish, politely asked “is there a lake around here where we can have breakfast?” Who hasn’t gotten “lago” (lake) and “lugar” (place) mixed up in Spanish every now and again though? Other than that, her Spanish has gotten incredibly good in a few weeks.

Check out all our stats on our newly-created Odd-Ball Trip Stats page here.

(if you have local things we MUST do or happen to be in town, send us an email!)

After leaving Iguazu Falls, we headed over to Salta – the home of one of the most dedicated Live Your Legend groups. Matías, the LYL Local host, and his lovely girlfriend Lucia offered to pick us up from the airport. Despite our delay, they were there with huge smiles on their faces. We had yet to learn that this would be just the beginning of their generosity…

They dropped us off at our Airbnb and we arranged to meet back up with them later for dinner. They also provided us with a 26 page “Legends Guide to Argentina” so we were set with where to go and what to see in their hometown. 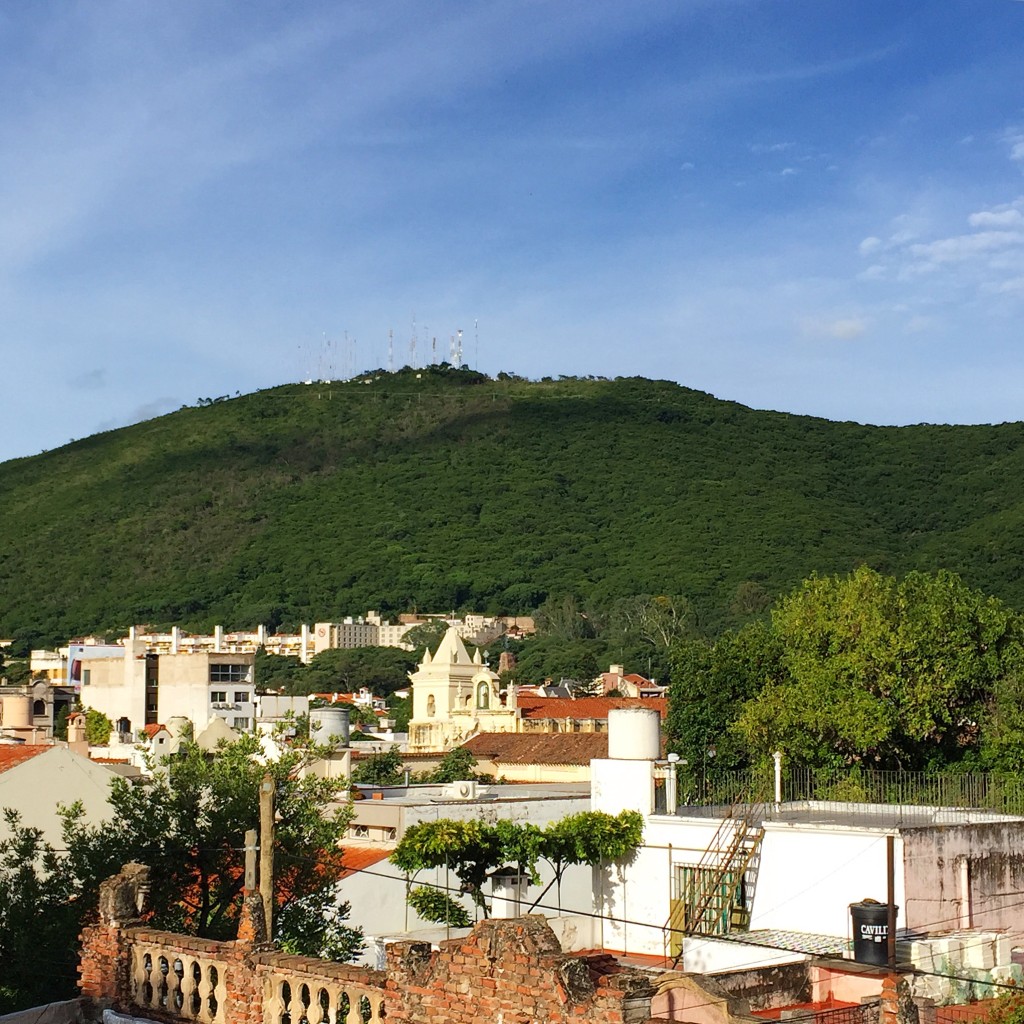 The view from our apartment in Salta

After getting settled, we wandered the streets of the old town, discovered Salta beer (which soon became our favorite) and humitas (corn and cheese tamales served with salsa), another favorite of this region – sooooooo good! 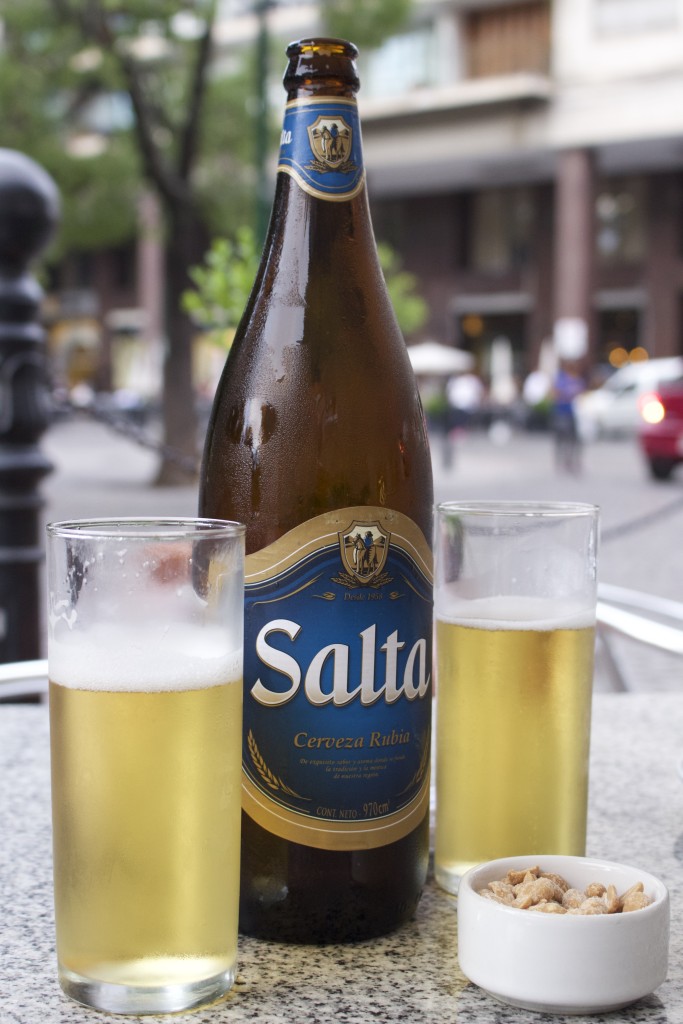 Our days in Salta were pretty casual. We had several work days and enjoyed the sauna, “hot” tub (only cold water) and rooftop of our apartment. We also did some day time activities, including hiking up to the top of Cerro San Bernardo – where we found a little free gym + impromptu spin class (with zero resistance bikes and great DJ!)… 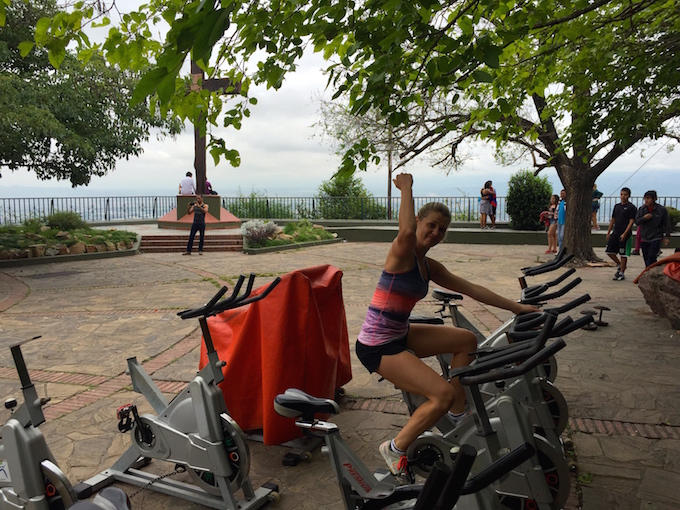 We also biked from Salta to San Lorenzo, which we completely under-estimated. We thought it would take a few hours with lunch… 6 hours, 25 miles and bursitis of Chelsea’s left knee later, we returned home with barely enough time to shower before the LYL Local event! But the ride was absolutely beautiful!!! And there were pigs for sale… 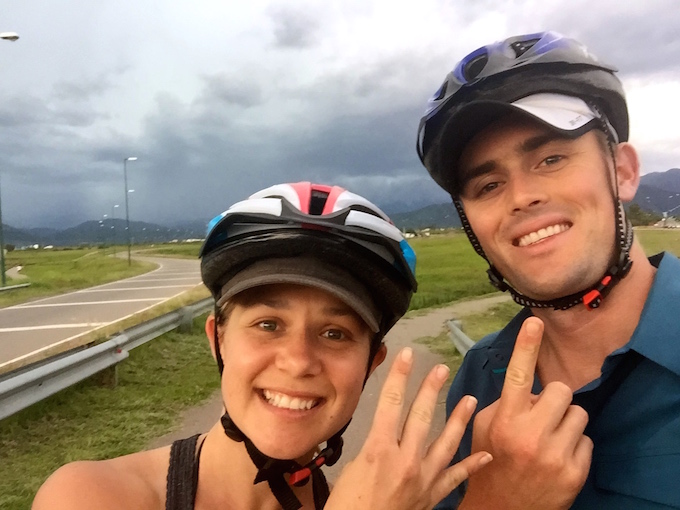 However, the highlight of our time in Salta was (once again) our dinner parties…

The first dinner party we had was with Matias, Lucia and Matias’ brother Santi and his sister Gauda. They picked us up at 4:00pm and we went to the grocery store to pick out the perfect ingredients for our asado. For those who don’t know, the asado is a gathering similar to a barbeque in the U.S. and it is taken very very seriously here.

After picking out the perfect cuts of meat (5 cuts – they estimate 1 pound per person!) and ingredients for Chelsea to make her veggie empanadas, we took the bus over to San Lorenzo, where we would have our asado at Matias’ grandmother’s summer house. However, maté takes priority, so we walked 2 miles each way to the quebrada where we sat by the river, sharedmaté and enjoyed our first alfarjore – this would definitely NOT be our last! It was such an amazing experience and it was then that Scott decided he needed his own mate because “it is so chill!”

Maté is a traditional tea-like drink that is designed to be drank with friends and passed around in a circle, with everyone drinking out of the same maté gourd. It’s all about bringing people together, which was really cool to learn (and a lot of why Scott fell in love with it – and because he thought he’d look slightly less like a tourista if he carried around a maté and thermous everywhere he went, as almost every other Argentinian seems to do). 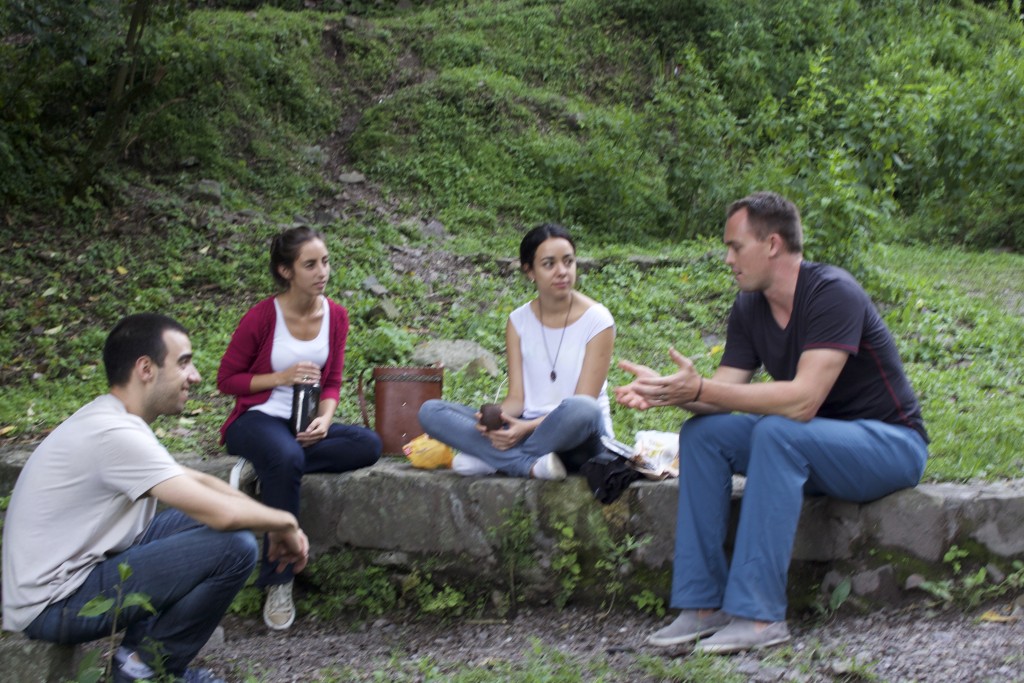 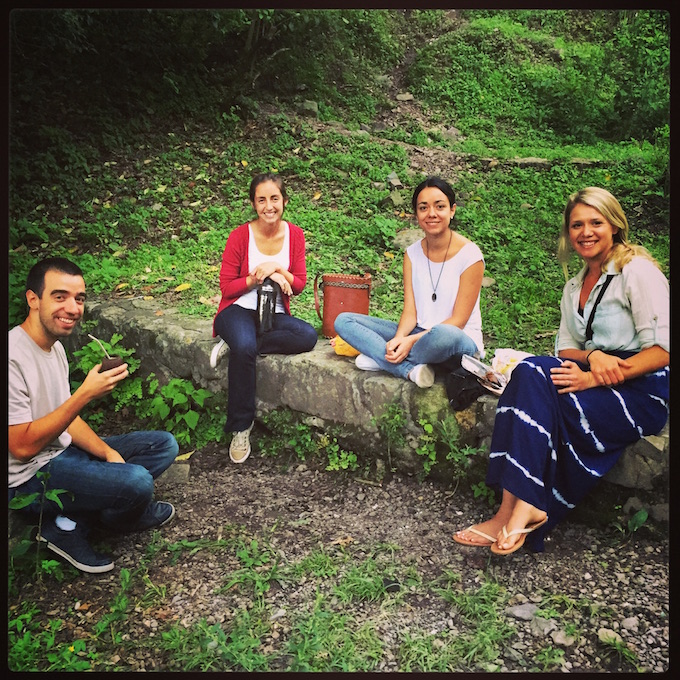 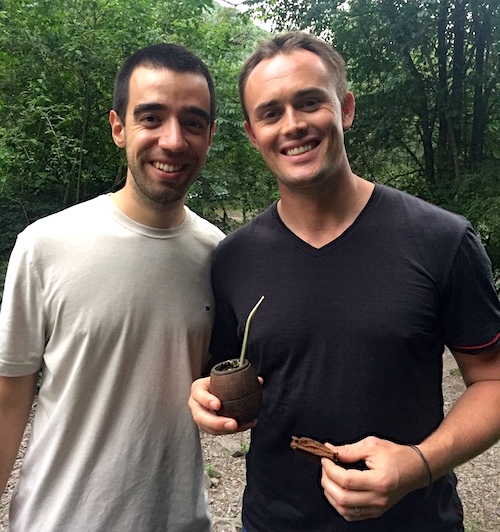 Next came the real star of the night, the asado… 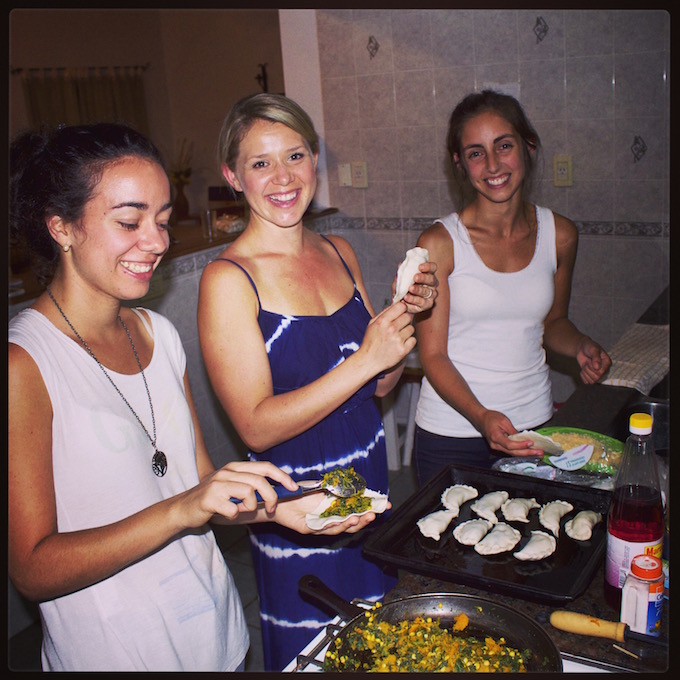 Chelsea teaches Argentinians her veggie empanadas and chimichurri recipe – pressure is on!

The story is best told through this video compilation…

We returned home at 3:00 am, after an epic dulce de leche blind taste test – an 11 hour asado! It was a true local experience and we cannot thank Matias, Lu and their family enough for showing us such a great time.

The following day was the LYL Local event + Salta Global Dinner Party. The event Had 30+ people and Scott was able to perform most of his interview style responses in Spanish – not an easy task! 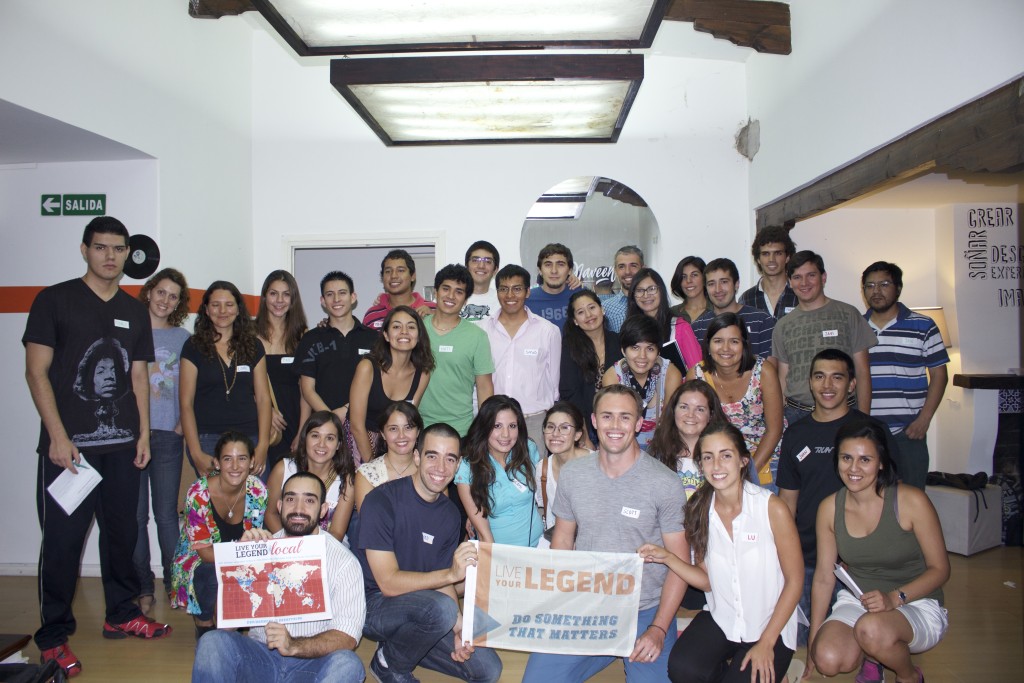 He also received his sought-after mate as a gift from Matias and Lu. 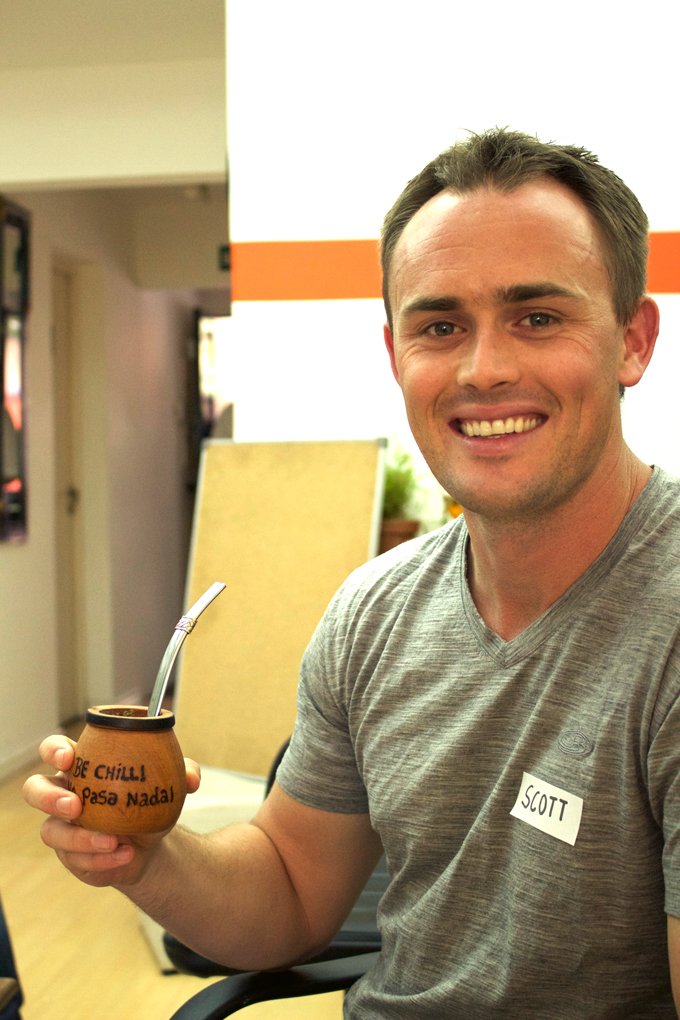 After the event we had a very quaint and super simple dinner party. We only had a few ingredients (and a quarter bottle of wine) in the house since we were leaving the next morning – it was the ultimate simple kitchen! 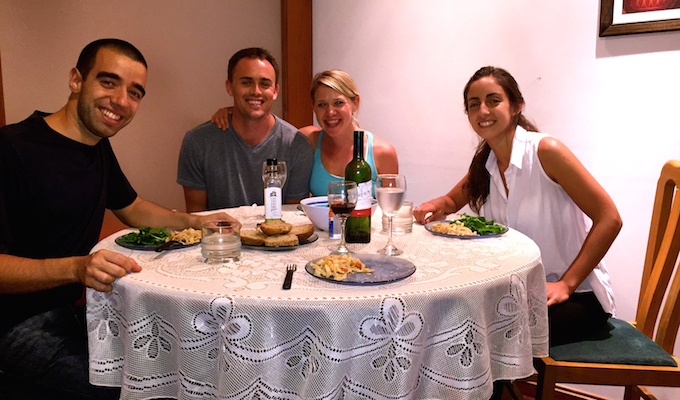 We were pretty tired from our long bike ride and had planned to go to bed early but to no avail, we found ourselves talking until the wee hours of the morning – and passing the maté around about a thousands times. That left only a few hours sleep before Matias and Lu showed back up at the apartment to film an interview… 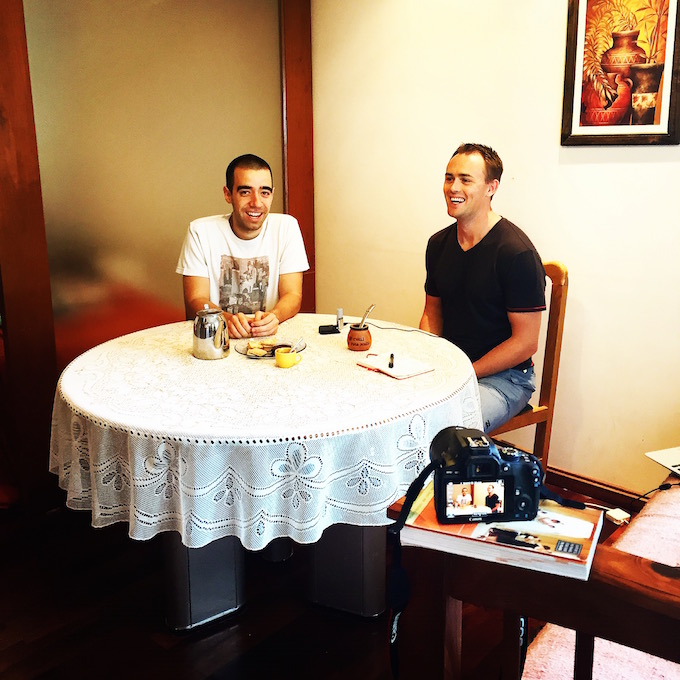 Our favorite things about Salta…

Challenges: The internet has continued to be an issue (i.e. hardly functions) but we are coping – we have a totally newfound respect for people running online businesses down here, like Matias and Lu at Super Habitos. Chelsea has decided to drop down her posts on the The Simple Kitchen to once versus twice a week in order to be able to keep up – and as you can see, the World Tour posts have not been exactly lightning fast. Hopefully once we get settled somewhere with faster speeds, we will be able to be more on top of things.

Trading in green juice for coffee: We drink something green everyday at home and Chelsea definitely misses it a lot. Although, we do admit, it has been interesting to test this habit. We’ve always had green juice and smoothies because we know they are healthy, and plan to continue once back home, but we have been a bit surprised by the resiliency of the body. While we do miss it, it appears to be more on the mental side.

Additionally, we had to do some official business… of getting our car Title replaced (to sell it in California), which involved Scott running around two cities looking for a notary and of course took much longer than planned, with multiple visits to multiple notaries and having to shell out a fist-full of dollars and pesos to finally get it done – 3 weeks from start to finish. Thankfully, Matias was a lawyer in his past life, so he hooked us up with a old colleague, which we estimate saved us about a dozen more hours.

Finally, we are starting to loose hope of Scott’s ID being returned (the notary was not happy about that either). All we know is that it is somewhere between Uruguay and Argentina….

How we are feeling: We’ve gotten into a decent little routine and were able to catch up a bit while in Salta, which felt nice. Especially since we are about to do more of the tourist thing for the next 5 days and Scott’s parents arrive a week after that.

Where we will write from next: The areas surrounding Salta including Cafayate, Cachi and Tilcara.

The difference of being in no hurry…

One of the coolest experiences of the trip so far is feeling what it’s like to not be in a hurry while traveling. Usually we cram every city, site and adventure we can into a couple week trip. But this year we have no real timeline, which has given the trip a feeling we’ve never had on the road (or really at home for that matter). It’s a luxury and we’re reminded daily of how grateful we are to actually get to go through things slowly, most of the time…