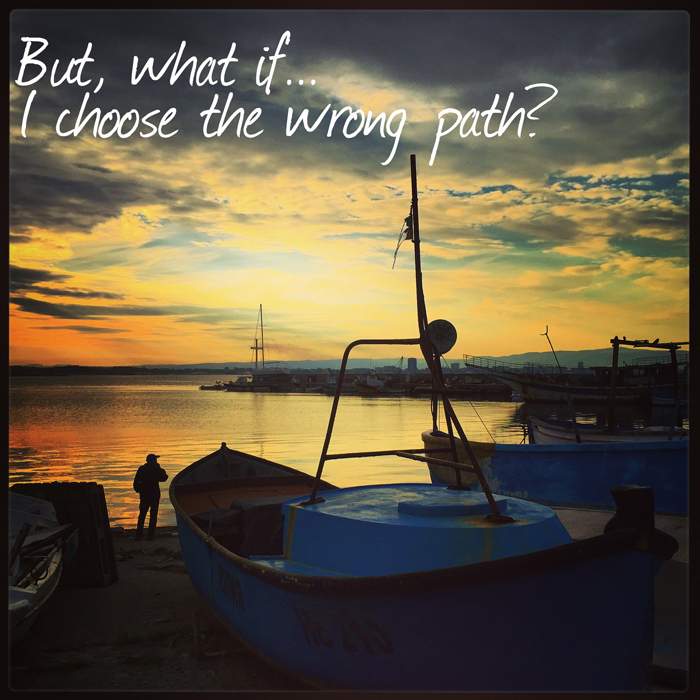 The fear of making the wrong decision haunts and paralyzes a lot of people.

Should I leave my job or stay? Should I pursue this passion or that? What if I choose the wrong direction?

The confusion usually leads to one of two things: blindly (and hastily) making big decisions, or going on forever without doing anything – both of which we want to avoid.

So, let’s talk about making the “right” choice…

Last week while on a train from Transylvania to Bucharest, I met a student named Andrey. He was from a small town in northern Romania and going to university in Amsterdam.

We spent an hour or more talking about everything from Amsterdam student party life to secret Transylvanian camping spots. Then the conversation turned to work, as it tends to.

Andrey was studying finance and thought he’d like to be an investment banker when he finished up.

This hit a special chord for me because for years during college and right after, investment banker was also my dream job. I was jealous of all my banker friends, their big titles and huge starting salaries… right up until I started to learn about the 18-hour days and occasional nights spent sleeping under their desks. That’s when I realized I knew almost nothing about what it actually meant to be an investment banker. I had just assumed.

I have nothing against investment banking, or any other career for that matter. But what I want to help people avoid is the pursuit of something that isn’t in line with who they are. Or worse, the all-in pursuit before knowing what they’re getting themselves into. And unfortunately, this mismatch happens in all walks of life, all the time.

So my advice to Andrey was simple, and it’s the same advice I’d give to anyone facing a big decision.

You’ll probably laugh at its simplicity, but it works.

Why most people do not experiment before diving headfirst into huge decisions blows my mind – especially with life or career choices that can take so much time, money and energy to undo.

No matter what you’re facing, there’s almost always a relatively simple, fast and inexpensive way to test your assumptions before fully committing…

You’ve been dreaming and glamorizing about a new job? Study, meet and befriend the people who do what you want to do. Find people who are a year or so into the career as well as the veterans who have invested decades. Search out the good and bad.

Ask not only what they do, but other big-picture questions: What surprised them? Would they do it again? If not, why?

Those three questions can provide so much clarity, and many people love offering perspective to others considering the same path. Shadow them for a day or week, or offer to do a paid or unpaid internship or project for them on the side if you have to.

Those few weeks of extra work today could literally save you a lifetime of frustration. Do this before you quit, so you can be confident in what’s next.

You wanna travel the world for a year? Try traveling and living lean out of a backpack for a month. Chelsea and I did that numerous times before setting off on this year’s trip.

Think you want to move in with your girlfriend or boyfriend? Try a short-term rental or go housesit together to get a feel for how things can change when you’re under the same roof.

You’re thinking about putting your life savings into buying a home? Rent a house (or room) in the neighborhood for a week (or month or year) to see if the noise, neighbors and all else is what you expected. Talk to the neighbors, take them to dinner and get a feel for their experience. Park on the street in the middle of the night on a weekday and weekend to make sure the train doesn’t plow through at 4am, or whatever other surprise you might not think you’re buying into.

Same goes for moving somewhere totally new. Spend a week or two of “vacation” time renting a place in town and acting like a local, going about your day-to-day routine, before you hire the moving truck.

You’re on the verge of buying a hot new Range Rover? (or whatever car you fantasize about – a Range Rover used to be mine) Rent one for a week or a month – there are companies that specialize in just that. Perhaps those few weeks will give you your fix – and save you a fortune. But if it’s everything you dreamed about, then go all in.

You’re about to take the plunge and build a product or business around your idea, passion or talent? Spend a few weeks in the shoes of the people you’re trying to serve. Feel their pain and figure out how you can help one specific person solve the problem you think you’re qualified to solve. If you can’t figure out how to help one, you probably won’t be able to help a hundred or a million, and spending months or years and piles of money likely won’t do the trick either.

This is how we’ve developed every product and tool at Live Your Legend. It’s the customer-driven approach to product development, and it’s the exact framework and process we teach in our Make Your First $1,000 Workshop.

We build the resources that you tell and show us you need. And we ask for your help during development to be sure it’s right. That dramatically increases the odds that I won’t waste my time creating something that falls flat and that you’ll actually get something that solves your problems.

That same testing and validation process can be applied to every part of life.

That’s my advice for everything we talk about, do and suggest at Live Your Legend.

Do it early, do it small, do it often, and you’ll drastically reduce your exposure to big self-induced negative surprises.

Do this exercise right now…

It’s easy to convince ourselves that big decisions come with big urgency, and yes, you want to be in the habit of always taking actions toward things you care about. But the most important first actions are these little tests to see if the commitment is worth it.

Humans tend to over-glamorize a lot (I’m no different). And even when we do see red flags, we find ways of convincing ourselves that we’ll somehow be different.

Kill the assumptions and remove some emotion – as early as possible.

While it’s impossible to fully remove emotion from decision-making (we’re human!), there are small investments we can make today that make things a lot less cloudy and give us a much better chance at making the decisions we’ll be proud of a year (or twenty) down the road. Imperfect data is much better than no data – and can save a fortune in regret later on.

You can’t figure it all out, but you can learn enough to be proud, confident and excited about taking the next big step – the one that can too easily be put off for a lifetime.

Because spinning your tires in indecision is still making a decision – to do nothing. It’s just not one you’ll likely be happy with later on.

Taking big leaps without first validating your assumptions is lazy.

It’s our responsibility (and totally in our control) to experiment – with everything.

Spend a little time killing the big assumptions today to be proud of your big decisions tomorrow.

Ciao from Nessebar, a tiny fishing village along the Bulgarian Black Sea,

Further Reading on LYL: Our Most Challenging Choice: 6 Steps to Ensure You Don’t Pick the Wrong Path