The Power of Influence: 6 Tools to Get Anyone to Do Anything

16 Mar The Power of Influence: 6 Tools to Get Anyone to Do Anything 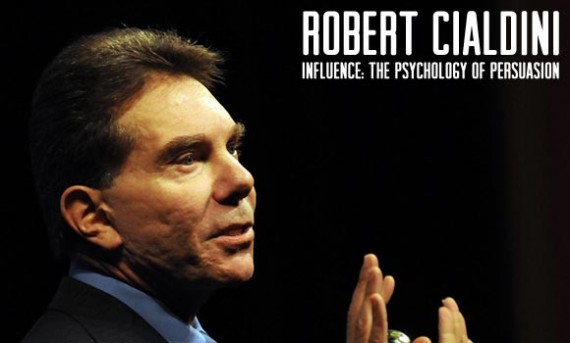 Influence is a part of every interaction.

Anyone who claims it’s not a part of their lives is probably the one being influenced.

Over the past few years, I’ve set out to discover what causes people to make decisions. The Book Influence by Dr. Robert Cialdini is the best summary I’ve seen. Cialdini’s work is the source material for the likes of Tony Robbins, who has positively influenced over 40 million people around the world to make significant life changes. I’m one of them.

Influence is so powerful that it’s the number one book recommendation from Charlie Munger, Warren Buffett’s business partner. I met Cialdini at the Berkshire Hathaway Annual Meeting in Omaha in 2008, and what I’ve learned since then has been nothing short of amazing.

The beauty of Influence is that Cialdini has done decades of research to prove the points he makes. His conclusions take about 300 pages to explain, but the nature of the points are simple as can be — and I bet a number of you have already experienced them. Whether you knew it or not is a different story.

So here are the 6 top influence tactics along with a quick guide of how you can use them TODAY. Use them wisely, be honest and go with a good heart. Please do not abuse them.

6 Tools to Get Anyone to Do Anything

1. Reciprocation: We always want to return the favor. Do things for others and they will feel obligated to do something for you in return. Even tiny acts of giving often result in disproportionate acts in return. The interesting part here is that the size of the favor or gift does not matter much, as long as you do it. Give someone a book and they might return the favor later on by giving you a job or signing a $100,000 deal with you.

2. Authority: We listen to people who seem important. They can be someone wearing a suit or a uniform, anyone with an MD after their name or an official with an impressive title on their business card. It doesn’t matter if they are actually powerful or if their expertise is relevant to our situation — we still listen. Dress and act sharp, and position yourself accordingly.

3. Commitment and Consistency: We want to stay consistent to past decisions. Once someone makes a decision, no matter how small, they are likely to act consistently in the future. Even the smallest sale takes someone from a prospect to a customer, and they become much more likely to buy again (and a larger quantity) in the future. If a customer talks about or endorses a product, they are much more likely to refer it to others and keep buying. Testimonials don’t just provide credibility, they solidify that customer’s commitment.

4. Social Proof: People follow the crowd. The more people are doing something, the more likely others are to follow. We find safety in numbers. This is another reason testimonials are huge. Do everything possible to show that the masses endorse you, your product or your service. Much less selling is required when you can point to countless other happy customers. Why do you think bartenders often have a visible tip jar? If others are tipping, then maybe I should, too. Whether you have one customer or one million, leverage it.

5. Liking: People say yes to those they like. Rapport is the foundation of all interactions. Find something in common. A hometown, sports team, the same bus route. Reflect the way they move and talk. The more they like you and feel you’re like them, the more they act in your favor. How difficult is it for you to say no to someone you genuinely like?

6. Scarcity & Urgency: We want what we can’t have. Whether it’s a woman, a backordered iPhone, acceptance to the premier business school or the club in Vegas with the longest line, the harder something is to get, the more we want it. Make your products exclusive. Create waiting lists. Set purchase deadlines, since we rarely act unless we have to. Interview your customers to be sure they’re a good fit. The second someone realizes they have to work for something, intrigue sets in. Maybe playing hard to get is a worthwhile strategy after all.

Now, check out the full list as presented by Dr. Cialdini’s team, via a very cool Youtube whiteboard sketch…

So there you have it.

This is just the tip of the iceberg, but honestly, this might be all that many of you will need to make a significant improvement in your ability to influence others. This stuff can and should be used everywhere, not just in business.

Very rarely does an interaction occur where influence isn’t involved. Deciding on where to go to lunch with the guys in the office, where to go on vacation, whether to take a bus or a cab, what to register for your wedding … influence is everywhere, whatever you’re doing. If there is someone else there, someone is doing the influencing and someone is being influenced.

Keep in mind that there is nothing wrong with being influenced as long as you are okay with that before entering the situation and you recognize when it’s happening. Sometimes it feels good to be sold on something. In fact, I love being sold on a fun product, service or person – as long as it feels authentic.

Now that you have the tools, a final word of guidance…

Be genuine. This stuff will blow up in your face and damage your relationships if you don’t mean what you say and do.

Don’t tell someone there’s a deadline if there’s not. They’ll see right though it. It may yield a little short term success, but it will kill your reputation.

Remember, these are not tricks to deceive. They are tools to help others make what you feel to be the best decision.

Have fun with them. And please use this stuff for good.