Serendipity 101: How I Create Luck (take this ONE golden step) 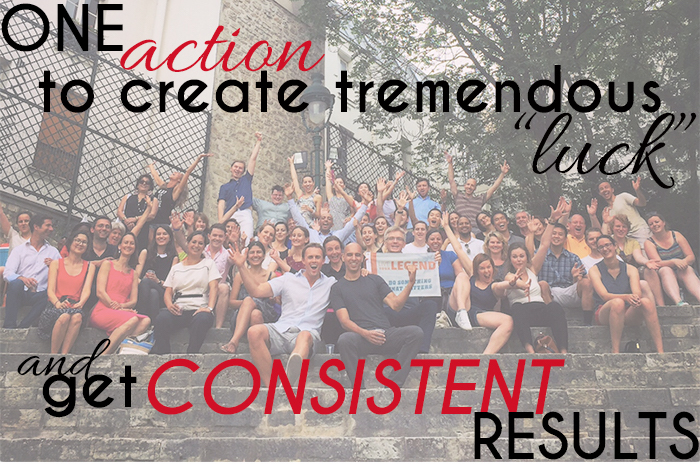 15 Oct Serendipity 101: How I Create Luck (take this ONE golden step)

“…when you want something, all the universe conspires in helping you to achieve it.”

This article is shorter than usual, so to add to the fun, I filmed a video and linked to a handful of our most popular articles on the topics discussed. Take some time to soak them in.

To start, watch the below video, then dive into the text and links that follow…

Have you ever seen the people who just seem lucky – all the time?

Their projects always seem to just work out, they meet the right people, get the right breaks and things just flow.

Well, I don’t buy it. Telling other people they’re luckier than you is an excuse. It’s hiding behind selfish fear.

Sure, there’s blind luck involved in everything. But these consistent “success” stories always have a pattern.

Know the people who inspire you.

Know the authors and influencers you want to meet.

Know who you are, the things that excite you and the difference you want to make.

Know the unique ways you can help people.

Know the things, ideas, people, places and events you care enough to make time for.

Have the courage to share your work, even when it’s not ready – because it never is.

Step into the person you are and you know you want to be, which is someone who shares himself and inspires others with the ideas and difference he wants to make.

Be the person who doesn’t try to puff out his chest or offer a facade to the world. Instead, be someone who decides to refresh the world by being unapologetically and vulnerably you. Because when you’re you, you give the people you’re with permission to be them. That’s often the greatest gift.

Then show up in the real world…

Instead of finding excuses for being too busy with things that probably don’t matter, find reasons to meet that friend or friend of a friend for lunch, to attend that last-minute event, or say hello to the interesting person sitting in the seat next to you on the plane.

Adopt the expectation that the time you invest will be worthwhile.

Believe that you’ll meet the person who will help get you to the next step – and just as importantly, the one who you can inspire to take their own step.

Because when you expect magic to come from the things you do, and you lean into that belief, magic starts to show up. “Coincidences” start to become commonplace.

You recently decided to sign up for a marathon, and the next day, you happen to sit next to a 60-year-old 10-time marathoner on the park bench.

You finally commit to starting your book, and that night, the father of your daughter’s preschool teacher turns out to be an editor – whom you only met after dragging yourself to that open house.

A failed business leads to your life’s work.

The “lucky” ones don’t fail any less than you do. In fact, they probably fail a lot more. But to them, it’s not failure. They do something with it. They’re habitually resourceful.

This is what I call serendipity – fortuitous luck – or as Webster puts it, “the occurrence and development of events by chance in a happy or beneficial way”.

They’re the coincidences that can’t be explained. The luck that starts to feel normal.

When the student is ready, the teacher appears.

If you go to an event thinking it will be a waste of time, it will be.

If you show up excitedly wondering who you’re going to meet, you’ll connect with someone worthwhile.

If you think the world is out to get you, it is.

If you lean into possibility and embody what matters to you, the world will be in your corner.

When we know who we are and consistently show up and represent that to the world, our conversations change. The people we hang around and those we attract are those who align with that vision.

And it all starts with that decision to show up.

That’s why our LYL Local in-person communities have become so powerful for our hosts and attendees. They didn’t show up to meet their new best friend or business partner. They never dreamed they’d finish their book or get their wife to finally understand why they’ve taken the road less traveled. But every one of those things have happened – numerous times around the world.

LYL members didn’t come because they were guaranteed or expected a world-changing experience. They just showed up because something inside them said that’s what needed to happen. These were the people they knew they should be around. Then came the luck. And the more they showed up, the spiral of serendipity grew.

In a few minutes, I’ll be landing in West Palm Beach, Florida, to trade ideas (i.e. learn from) 20 entrepreneurs from around the world for a 3-day, in-person mastermind session.

I only know one person who will be there, and everyone has more experience than I do – by a looong shot.

The timing of this event was awful. I’ve been on the road or entertaining guests for nearly 30 days straight and I only have two months left before Chelsea and I leave San Francisco for our year around the world – to see many of you (I’m not complaining, trust me!).

But I’ve been around long enough to know what happens at gatherings like this.

And that’s why I can’t wait for these wheels to touch down and see what comes of it.

To be clear, this is not me handing out a prescription to run yourself into the ground by saying “yes” and showing up to everything under the sun.

I’m suggesting you get crystal clear about how you want to show up so that you can say “no” to everything that’s not you and say “Hell, yes!” to the actions that change everything.

So, what’s one way you can show up in the next week? Tell us in the comments.

P.S. There are BIG things coming for Live Your Legend Local very soon. We’ve been working crazy hard behind the scenes to set up a totally new platform that I believe is going to transform the way in which all of us can connect – in the real world and online. Hosts to hosts, attendees to attendees and everything in between.

I think this is going to totally change the trajectory of LYL Local. And the best part? As always, it’s totally free to all of you. Because we believe that surrounding yourself with passionate inspiring people in the real world is a fundamental right. And we’re doing all we can to facilitate that. More details coming soon!