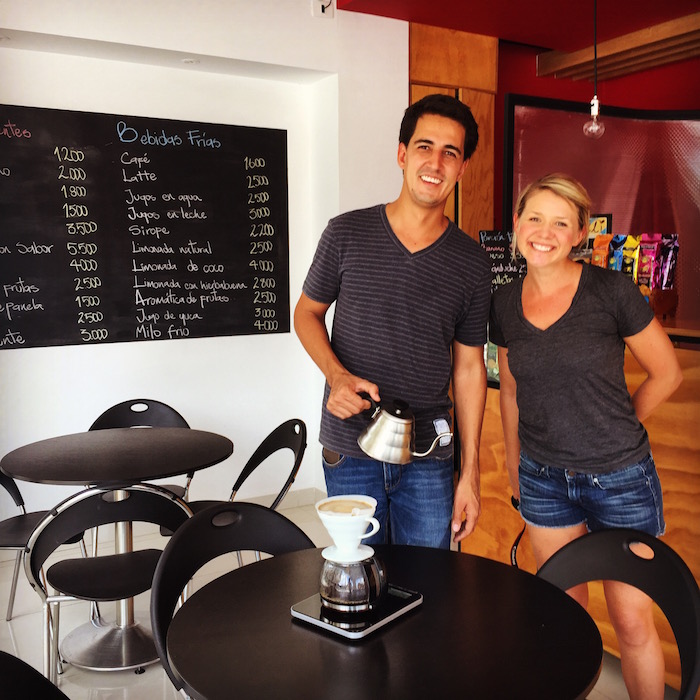 “There is no failure except in no longer trying.”

World Tour Image Caption: Say hi to Santiago, whom we met a couple of weeks ago. His family has been farming coffee in rural Colombia for 70 years. This was taken just after he walked us through their farm and whole operation on the outskirts of Qimbaya, a tiny town nestled deep in the Colombian coffee fields.

He’s the third generation to carry the torch, and his recently-opened Café de Altura completes the full bean-to-cup circle. He poured our third cup a few minutes after this pic, served alongside homemade guava, cheese and banana cake. So much respect for those who make things from scratch!

Now for my slight rant on failure…

Last week we talked about Your Biggest Risk In Doing Work You Love, and pursuing anything meaningful, for that matter. The risk that’s far worse than failure.

If you watched the short video I recorded, hopefully you’re starting to agree.

And since failure still seems to haunt most of us, today I want to take it a step further.

So, here’s how to avoid failure altogether…

This was first taught to me by a mentor of mine years ago, right as this site was starting to get a little traction, but still hadn’t become anything close to resembling a community, movement or business.

I had no idea what I was doing (still don’t really), and was totally overwhelmed by the things I could or should be doing.

Building an audience, making LYL feel somehow unique, becoming more of an expert, deciding on my first product, how to release it, what to spend my time on, and how I could possibly stand out and be competative given what all the people I respected and admired had already built.

It felt like there were endless ways to fail.

The biggest risk is convincing yourself it can’t be done.

You start believing you’re somehow different and less capable than the people who have gone before you. That you aren’t creative enough, aren’t good at giving yourself orders, can’t focus, or maybe you think “selling” just isn’t your thing.

So you decide to stop.

That’s it. We create some horror story in our head that causes us to decide not to take even the tiniest next step. The mountain feels too high, so we drown ourselves in mental vomit.

Or worse yet, we never start in the first place.

So as it turns out, our biggest risk of failure is also one of the few things that you and I are 100% in control of.

This doesn’t mean you mindlessly charge forward without regard for possible diversions or serendipity along the way.

It doesn’t have to mean you devote 110% of every heartbeat towards making something happen. At times it might be a 10 or 20% project. Other times might call for 100% or more.

It doesn’t mean you won’t decide to correct paths along the way. That’s almost guaranteed. And if you do, that’s not failure.

If you take a crack at something and it doesn’t go as planned (what does anyway?), that is NOT failure – unless you’re too lazy to take the time to learn, correct and be sure you don’t repeat it.

It’s all learning. It’s all growth. It’s all progress.

None of that is failure.

We have to stop being so damn unfair and hard on ourselves.

This is as much advice for me as it is for you.

Measure yourself against things you’re actually working towards, not some pipe dream you’re hoping will just happen without working your ass off to get it.

If your current goal is to build your expertise, audience and reputation, then don’t kick your own ass because you’re not making money from your passion project.

This has become a bit of a pet peeve of mine. So many people I talk to (including myself early on) complain that they’re not making money. But then I find out they have nothing for sale!! If you don’t put a price on what you have to offer, you have ZERO chance of being successful at making your first dollar.

That is not failure. That’s just ridiculous self sabotage.

I get it that this stuff isn’t easy. That is not what I’m saying, and that’s why we cover all these topics on LYL.

By the way, if you feel like you’re a victim of this mythical money making goal, then check out our workshop on How to Make Your First $1,000 from Your Talents & Passions. It comes with a ‘make your first $1k in 3 months’ guarantee.

So here’s the real measure of success…

How are you doing against the specific metrics and goals you’re actively working towards? If you’re putting in effort, learning and correcting, you are getting better. That is A LOT better than failure.

It’s ridiculous to think you’ll get better at leg squats if all you’re doing is bench press five days a week.

As the notorious saying goes…

“Insanity is doing the same thing over and over again and expecting different results.”

What I’ve learned is there are endless ways to be successful, but only one real way to fail.

The intentional pursuit of the spark leaves you better off than if you never started. Striving is far better than letting the dream slowly die.

The death of an unborn dream – now that’s true failure.

The real indicator of success is that you don’t stop pursuing what matters. Ever.

Failure is in our control.

So, what’s your dream worth feeding right now? What can you commit to not giving up on?

Tell us one sentence about it in the comments here.

If you want it, keep going.

P.S. Perhaps next week we’ll talk about a few of my favorite ways to keep you from giving up…

P.P.S. Oh and if you disagree with my thoughts on failure, I also want to hear about that in the comments!