The Biggest Lesson from My Weekend with Warren Buffett 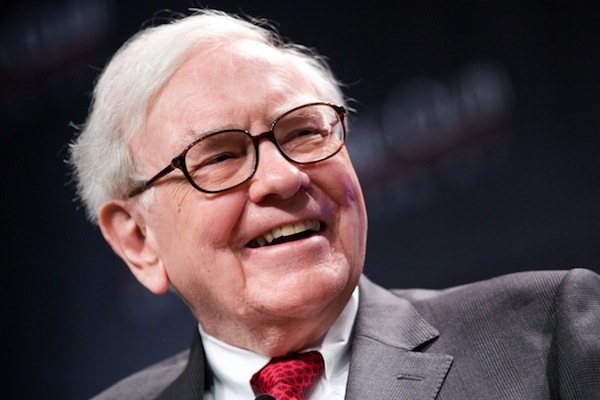 08 May The Biggest Lesson from My Weekend with Warren Buffett

“Our competitive advantage is that we make a promise and we keep it.”
– Warren Buffett [image credit]

The Power of a Promise

I spent last Saturday in a room soaking in lessons from Warren Buffett and his partner Charlie Munger, as I have for seven out of the past eight years.

The Berkshire Hathaway annual shareholders meeting has become one of my favorite learning days of the year. It’s also the closest I’ve gotten to making Warren a part of my average five. 😉

The simple lessons on life and career are priceless.

But as I reviewed my 20 or so pages of notes to write up my biggest takeaways (as I’ve done in past years here and here), it became clear that one overarching theme deserved today’s attention…

During the seven-hour question and answer, one man asked about Berkshire Hathaway’s competitive advantage.

With a company as big and complex Berkshire – worth over $300 billion with over 70 operating companies – the answer could have taken all day. But in true Buffett fashion, he explained it all in one sentence…

“Our competitive advantage is that we make a promise and we keep it.”
– Warren Buffett

Simple? Sure. Profound? I’d say so.

Warren and Berkshire Hathaway have been making and keeping simple promises for decades.

They promise the companies they purchase that they’ll treat them with respect and allow them to continue operating autonomously.

They promise their CEO’s they’ll get to run their businesses the way they want to, with hardly any oversight.

They promise shareholders they’ll run Berkshire in their best interest, despite what Wall Street says.

And here’s the kicker. They deliver on those promises, just as they have consistently for the past 50 or so years, with hardly any exceptions.

As a result, some of the most well-run and profitable private businesses in the world often approach Mr. Buffett saying, “You’re the only person our family would consider selling to. If not you, then we won’t sell.”

This, along with Buffett’s incredible investing savvy, have allowed them some of the best investment prospects and deals in financial history and have turned Berkshire Hathaway into one of the biggest, most valuable and best-performing businesses of all time. Buffett has made around $50 billion in the process, 99% of which he’s pledged to various charities.

This also helps explain how his first annual meeting of about eight attendees held in a little cafe in Omaha has grown into around 40,000 partners, ages nine to over 90, coming from every corner of the world. This makes it the biggest shareholder meeting in the country – by a long shot.

As the day went on, I noticed many of Buffett and Munger’s responses coming back to a similar theme…

By the standards of the rest of the world, we over-trust and we hire people knowing we’ll over-trust them. That’s done very well for us. We want to create a culture of deserved trust.

We want to be good partners because it attracts good partners. The way to get a good spouse is to deserve one. It’s the old-fashioned way of getting ahead.

I’m not concerned about Berkshire not making money because we’ll figure that out. What concerns me is someone doing something that really effects our reputation.

As it turns out, Buffett’s answer might be some of the most powerful career and business advice around.

The strength of our reputation is based on the promises we keep. Your personal brand is built upon what people come to expect from you, based on their past interactions. And that brand is what can build or destroy your impact.

And the success of a business is based on the promises it keeps to its customers.

It’s not about the hype or the claims. You thrive or die on the experience the world actually has with its interaction.

Buffett always says a brand is a promise. It’s a promise that you’ll get exactly what you were told you’d get. When you deliver on that promise consistently over a long period of time, people think you’re remarkable. Eventually, you’re the obvious choice.

You become your own monopoly.

I love the brands, companies and people that I’ve chosen because I trust them. They make and follow through on promises without me even noticing. And over time, that makes me incredibly loyal.

Nowhere is a promise more powerful than the brand that your own name represents – it’s the image you prove to the people around you.

I try to build upon our Live Your Legend promise with everything I do so I can provide you with the most useful tools and community we’re capable of creating to help you find and do work you love and surround yourself with the people who make it possible.

Your trust means everything to me. Everything I do, I do with the goal of building upon that trust. Because without your trust, there is no Live Your Legend community, no business, no revolution. It all hinges on the promise. So does every relationship you and I seek to build.

Sure, we don’t get it perfect every time. I screw up. And yeah, Buffett screws up too. None of us will always get it right. But missteps become a lot less likely and much less severe when backed by trust. And decisions become so much easier.

It brings up the important questions…

What promise do you want to represent to the world?

Have you been keeping the ones you’ve been making?

Are they building upon the brand and impact you want to be known for?

Because it’s the small kept promises that lead to the connections, the sparks, the serendipity and to the runaway successes.

The challenge is that it’s tough to notice the progress day by day, making it all too tempting to trade long-term respect for a little short-term reward. Buffet is unbelievably talented at avoiding this trap despite being called an idiot in the press every decade or so.

During these seductive times, it’s helpful to remember a statement Buffett made back in 1991, taken from a video that’s played at the shareholder meeting every year…

After they first obey all rules, I then want employees to ask themselves whether they are willing to have any contemplated act appear the next day on the front page of their local paper, to be read by their spouses, children, and friends, with the reporting done by an informed and critical reporter. If they follow this test, they need not fear my other message to them: Lose money for the firm, and I will be understanding; lose a shred of reputation for the firm, and I will be ruthless.

It’s scary to think how quickly a lifetime of trust and kept promises can be destroyed.

It’s equally amazing to realize that our biggest competitive advantage – for ourselves and the businesses we build – is 100% in our control.

Our future opportunities will come from the promises we keep today and the people to whom we keep them.

You have my trust and respect.

I promise to continue to earn yours,