The Magic of Attempting the Impossible

21 Jul The Magic of Attempting the Impossible 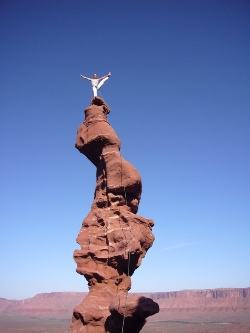 “So many of our dreams at first seem impossible, then they seem improbable, and then, when we summon the will, they soon become inevitable.”

Three weeks ago I thought that running a barefoot 50k Ultra Marathon at 7500 ft. of elevation would be impossible. So did a few others.

Three days ago I found out it wasn’t.

In just a sliver under 8 hours and 24 minutes, after over 31 miles, I wobbled across the finish line of the Tahoe Rim Trail, barefoot-style (In my Vibram’s).

Up until Saturday I’d never run over 15 miles, let alone a marathon, especially at elevation.

I heard all kinds of objections (both from myself and others). But you haven’t even run a marathon. Those barefoot things you call shoes will never give you the support you need. That elevation gain is too much for a first long run. And on it went.

So why did I decide to give it a shot? Because it seemed impossible.

I believed a lot of it for a while and then I just decided what do I have to lose? The worst case is I can’t finish. Who cares? It was impossible anyway, right?

Besides, I had recently read Born to Run and I was fired up about the possibility of the human body. I was dying to test out if I too was ‘Born to Run’. This event was the perfect chance. And I love a good challenge.

For those of you who haven’t read Born to Run, it will dramatically change the way you look at the human body and it’s possibilities. The author tracks an Indian tribe, the Tarahumara, whose members of all ages are able to run hundreds of miles at a time with nothing but thin sandals on their feet. A must read for the physically active. The book discovers:

How and why we as humans are meant to run.

Why barefoot is the least injury-prone way to do it (I’ve been running in Vibram barefoot running shoes ever since).

That pure love for running is what makes extraordinary distance possible.

The unbelievable limits of the mind and body that most of us never come close to reaching.

When was the last time you attempted the impossible?

Over the past 10 years or so I have made it a habit to attempt what others and/or myself have considered impossible. It makes for the best challenge in the world and the results are magical no matter what happens. Let me explain.

I’ve seen the impossible come true way too many times to not try otherwise. People have a tendency to use this word all too often. So often that it gives the world an excuse not to live up to our full potential. Just because someone says you can’t do something doesn’t mean you can’t. It just means someone thinks you can’t. Imagine if Bill Gates, Steve Jobs or Sergey Brin listened to the skeptics in their lives.

When we obey the impossible the result is mediocrity.

Impossible triggers many of us to stop short of what we’re capable of. It keeps us from truly testing the edge. And without knowing our limits, how will we ever experience our dreams?

The Benefits of Attempting the Impossible:

1. There are no expectations. So often we attempt things where there are standards by which we are quickly judged. And even if no one else is paying attention, we are our own worst critics. So much of unhappiness and disappointment comes from mismanaged expectations. The impossible has the lowest expectations of all. If you fail, who cares? It was impossible to begin with. Try being underpreapared sometime. It’s liberating.

2. There’s less competition. The majority of people are trained to listen to and shut down at the sight the impossible things in life. This leaves the field wide open for you. Oddly it is the most audacious goals that have the least competition. It’s the mediocre ones that everyone is clamoring over. If you want to leave your competition in the dust, simply attempt something they’d never dream of trying.

3. Growth is guaranteed. The point of attempting the impossible is not to always find victory. The person who consistently tests the impossible will experience more failure that the one who always settles for the average. But the former will also experience many more outrageous accomplishments. There is no failure as long as you’re learning. With every expereince comes a lesson. Big lessons come from testing the impossible. Either way you will be a new person for having tried.

4. You might just get it. It’s true that not everything is possible. But how can you ever know if you don’t try? One thing is for sure: Your chances of doing it are 0% if you never try. Give it a crack and you just might surprise yourself and succeed. The victory will expand your realm of what’s possible. The ripple effect throughout your life will be amazing. If you accomplish enough impossible things, you’ll be unstoppable.

Fear is usually the number one reason for not doing something. But ask yourself what’s so scary. What’s the worst that can happen? For me it was not finishing. Big deal. I was underpreapred anyway.

You’ll often find your worse case to be right where you were before you ever tried. This goes for starting a business, leaving your job, asking someone out or just about anything else. So you quit your job to start a business. If it fails then you’ll probably end up at a similar job as you were before. If your current situation is your worst case, what could you possibly have to lose?

The thought of an Ultra Marathon at elevation scared me at first. So instead I looked at it as an all day hike. We are free to define things however we choose. If someone interesting seems like they’d never say yes to a date, then think of it as making a new friend. If starting a business is too scary, then consider it a hobby. Reframe the impossible until it seems possible.

Everything was impossible until someone decided not to listen.

The world’s inventions have always come from someone who decided to attempt the impossible, and succeeded. Everything was impossible, even ridiculous, until someone invented it.

It was crazy to think the flip of a switch could light up a whole house back when everyone was carrying around candles. Good thing Thomas Edison didn’t think so.

The human body was scientifically incapable of running a four minute mile, right up until Roger Banister went out and did it. Then what happened? 16 people did the same the following 3 years.

But impossible does not have to mean what the world thinks can’t be done. It may be something you’ve felt was personally impossible (like my run) or the things people tell you can’t be done given your life situation. You’re too young, too old, too sick, undereducated or underprepared. Remember, usually the people who tell you this are the ones who never made the attempt.

“Impossible is a word only to be found in the dictionary of fools.”

Our lives are defined by the impossible.

My life would be worlds different if I’d listened to all the people who told me what I couldn’t or shouldn’t do. So many magnificent experiences with my businesses, relationships and body would have never existed. Think back on your life and I imagine you’d agree.

It’s easy to go through life finding excuses for not doing things. You will produce plenty on your own and the world will provide mountains more. But if you wait to be perfectly prepared to attempt your dreams, you’ll never try anything. The timing is never right. You’ll never have enough experience. You can always prepare a bit more.

Hearing something couldn’t be done has always been my biggest motivator. Why not make it yours? I’d much rather find out for myself than be guided by someone else who might not have even had the courage to try.

The limits of possibility are where all the growth happens. Be it in the world or in your own mind. And a mind without limits is tough to stop. Let it loose!

Be a fighter of the status quo. Just because it hasn’t been done, does not mean it can’t or that it shouldn’t.

Go out and try something the world believes is impossible. Who knows, you might just get it.

“I tell people I’m too stupid to know what’s impossible. I have ridiculously large dreams, and half the time they come true.”

What have you accomplished that the world told you was impossible? How is your life different as a result? Please share in the comments section below.

If you liked this article, please Tweet about it or tell your friends on Facebook using the links below. I’d appreciate it.

Other Books and Resources to Help You Along the Way:

As a Man Thinketh

Pictures from my Ultra Marathon: Are We Born to Run?