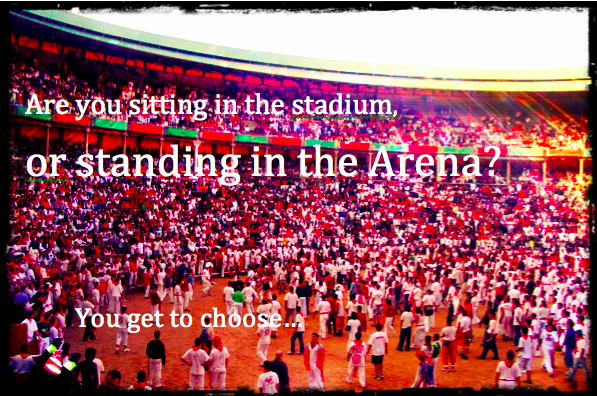 Here’s to the Man (or Woman) in the Arena…

I took the above picture when I ran with the bulls in Pamplona, Spain in July of 2004, during their annual Festival de Sanfermines (also know as El Encierro). We took a very aggressive starting position, which involved bulls being a lot closer to me than I’d care to experience.

But what most non-runners don’t realize is that the craziest part of El Encierro isn’t the half-mile uphill cobblestone sprint to the arena.

The craziness really starts once you’re actually in the arena. Where hundreds of daring (read: loco) folks dance, run and ‘play’ with the bulls as they charge into the arena one-by-one. People get trampled and others get flung into the air by the quick flick of horns and neck. The animals pretty much have their way with those willing to chance it in the center.

Had I known the level of chaos involved in that run (literally no rules applied), I would have never shown up that morning.

But such is the case with any experience worth having.

Especially when pursuing the work we can’t not do – When deciding to set foot in the arena and battle for a cause we deeply believe in.

So today I want to honor YOU.

For having the courage to be on this journey with me. For agreeing to the 15 Rules of OUR Revolution and for being the heart of our movement to get the world doing the work that makes us come alive.

It’s not easy work. But I believe it’s worth every fiber of our effort. Because when done together, this is what has the power to change the world.

So today I want to share a little gift with you. It’s an excerpt from Theodore Roosevelt’s “Citizenship In A Republic” speech, delivered at the Sorbonne, in Paris, France on April 23, 1910.

I have this permanently etched into a bowl on my desk. Enjoy!

The Man (or Woman) In The Arena…

It is not the critic who counts;

not the man who points out how the strong man stumbles,

or where the doer of deeds could have done them better.

The credit belongs to the man who is actually in the arena,

whose face is marred by dust and sweat and blood;

who strives valiantly; who errs,

who comes short again and again,

because there is no effort without error and shortcoming;

but who does actually strive to do the deeds;

who spends himself in a worthy cause;

who at the best knows in the end the triumph of high achievement,

and who at the worst, if he fails, at least fails while daring greatly,

so that his place shall never be with those cold and timid souls who neither know victory nor defeat.

Thank You For Joining Me In the Arena

250 of you took that to the next level in jumping into our Connect with Anyone community in the past few days – I congratulate you for that and am grateful for your company.

And the other tens of thousands of you, now from every country in the world, deserve just as much credit – for deciding to show up and be a part of what we’ve built at Live Your Legend.

I love you guys. I love what we stand for. I love fighting the good fight with you all.

And most of all I love that we’re in the arena together – and that we’re only just getting started. It would be impossible on my own.

And for those of you who feel you’re still stuck in the stadium, please reread the above quote.

Now’s your chance to take the step from victim, to main character. From passive observer to the author of your own story.

More than anything it’s a step in mindset. A change in thinking that ripples across your whole world. A ripple that transforms the way you think, the way you act and the way you show up in the world.

I believe the only real victory comes from deciding to live your life right there. Right here. Front and center. Doing what you know matters – to you, and in turn, to the world.

It’s not what specifically comes from being in the arena, because that will always have its ups and downs. What matters is you decided to enter in the first place. To stand tall and lean into the uncertainty.

We do that together and we can have a lot of fun.

We also just might end up changing the world.

Thank you for joining us in the arena.

What are you doing to live in the arena? Share & inspire us in the comments!

P.S. For those of you who have yet to join our Revolution, you can do so on this page (it’s free!). We’d love to have you.