The Trust & Give Method for Doing Authentic Business: Lessons from the Greeks 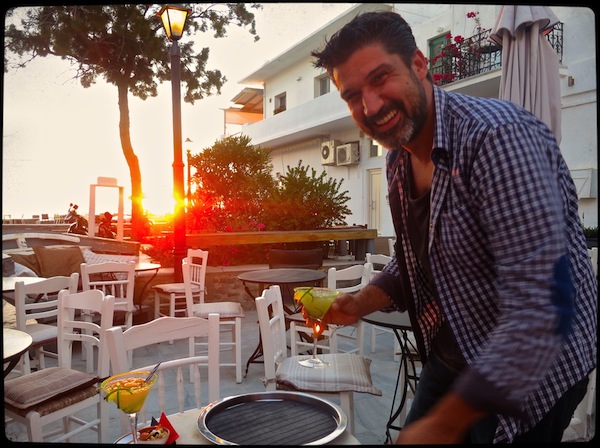 11 Jun The Trust & Give Method for Doing Authentic Business: Lessons from the Greeks

I travel for a lot of reasons.

My favorite reason is not knowing. Not knowing the people, stories or ideas that might come, but being certain of one thing – that I’ll be surprised.

It was as if every local we met was running off the same unspoken rule – to trust and give.

And since it happens to be the same rule we talked about last week, today I thought I’d share a few personal experiences from our travels to give you a feel for how refreshing it is to be on the receiving end of things.

Yiannis, the owner of the cafe below our apartment in Paros, offered to give us the local’s tour of the island during his day off – even though he works full-time by day and runs his bar six nights a week, often closing after 2am. (His boat-themed bar was by far the coolest we saw all trip. It’s a must if you’re ever in Paroikia town). The guys’s smile is contagious – see above picture.

A fisherman had just come out of the water with a haul of fresh octopus and sea urchin. I asked a few questions and took some photos as he cleaned his catch. “You like seafood?” he proudly asked, as he handed me the freshest whole sea urchin I’ll surely ever try.

When George, the baker down the street, couldn’t make change for the 20 Euro bill we used to pay for our breakfast, he just gave us the bag of warm pastries and told us to come back and pay some other time.

George also introduced us to Cameron, a U.S. expat and local art teacher, who offered to take us on some of his favorite undiscovered hiking trails around the island and invited us to his art show the following night. When we saw him at the art show, he continued the hospitality by inviting us over to his house in the countryside for dinner.

The cashier at a small corner market saw us examining a large jug of colorless liquid behind the counter. Without asking, he poured us each large shots of his homemade raki (aka Greek firewater). Then we all toasted over the cash register. The stuff wasn’t even for sale. And it was barely noon. Unsolicited free booze offers were more frequent than you’d think.

One morning, we realized we were a day off in our apartment booking, causing us to have to move out in 15 minutes instead of the next day. Penelope, the mother of the apartment owner, gave no more than two seconds of thought before demanding, “You must stay in my guest house tonight, free of charge. I insist. We have to fix this. You must have a home.” The energy in her voice made me think she was happy for the mishap. Almost as if she’d just been waiting for a reason to extend an invite.

We told the owner of a wine bar in Crete that we’d just be having a glass of wine, but not any food. His response: “Well then, I’ll bring you some fruits on the house.”

Simos, the owner of our apartment in Hania, picked us up from our delayed bus arrival at midnight. During the drive home, he told us about the physics exam he had at 8am the next morning. Then he finished our apartment tour by giving us one of his cell phones for “whatever you might need during your stay.” He texted us each day to see how he could help.

On a morning walk towards the old harbor in Hania, Chelsea and I poked into a taverna, curious to know about the sign out front that read “vegan and vegetarian biofood.” Within 30 seconds of our questioning, a gray-haired old man slightly resembling Santa Claus (but even more jolly) pulled us into his kitchen to give us a proper answer. Stelios then dipped a wooden spoon into every warm pot and dish he had prepared that morning, giving us enough samples to easily cover a hearty meal. After a short private lecture on cooking with love (instead of recipes), he sent us on our way, never pushing for us to sit down and order.

Later that afternoon, we came back for lunch. When the bill came, we found out they didn’t take credit cards and we were all out of cash. Stelios didn’t even pause. He just smiled and said to come back to pay before we left town. We returned three more times. (His food was like nothing we’d tasted all trip – Stachi is a must if you’re ever in Hania, Crete.)

After buying a few bowls from a family’s pottery shop, the father told us to go pick out one more piece, as his gift to us. It wasn’t part of some deal or sales pitch. We had already made our purchase and hadn’t asked for anything special. He just figured, why not?

Near the end of a late dinner around 1am, our waiter introduced us to a Greek man who had lived in California for two years. He spent the next 20 minutes drawing us napkin maps of the town and island and explaining his favorite restaurants and beaches, mentioning multiple times how it was best to explore the island by car. That’s right about when he said we were welcome to borrow his ride anytime during our stay. He wrote down his email and cell and took off.

Chelsea and I joked about his offer, knowing he couldn’t be serious (who would ever lend their car to two foreigners he met at a late-night restaurant/night club??) … until we ran into him again the next day, and he reminded us that his free rental car offer still stood.

And this is just a taste. I could go on and on.

No drink was served without some free food to go with it. Every dinner was followed by dessert and nightcaps – all on the house. They didn’t even try to upsell us.

Every day someone surprised us with the kind of trust, generosity and hospitality that I’m used to experiencing as the exception, not the rule.

They weren’t doing it to sell us. In many cases, there was no transaction involved at all. There was no mention of money, and when we insisted on compensation, some even seemed to take offense.

For them it was as if they couldn’t help but share a little bit of who they were. Their pride and confidence in the value they had to offer led them to consistently and excitedly offer whatever help and experiences they could provide.

And this is exactly what last week’s post on connecting through giving and helping was all about. I’d never seen so many real examples in one place until I started hanging around some new Greek friends.

That’s what was so surprising.

It’s refreshing to spend time with someone living this way. The trust creates trust. The generosity makes me want to give.

It also made me want to live a bit more in the same way.

And that’s what keeps me traveling.