World Tour: “Forced” off the Beaten Path (& Hanging with Dracula) in Transylvania, Romania 04 May World Tour: “Forced” off the Beaten Path (& Hanging with Dracula) in Transylvania, Romania

Posted at 04:46h in World Tour by Chelsea Dinsmore

“All journeys have secret destinations of which the traveler is unaware.”

Hours spent on trains in past two weeks: Over 25

After finding out about the rules of the Schengen Agreement, we had a brief moment of panic, but pretty quickly realized how this would force us to venture places we hadn’t yet planned. Enter Romania! 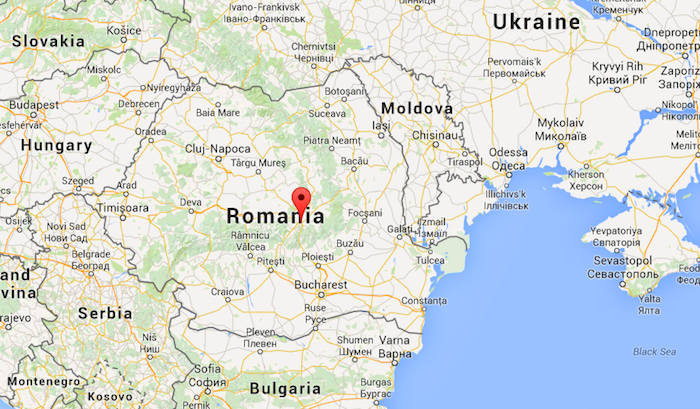 There are so many places to discover and explore but for some reason Romania wasn’t on the top of that list (what is, you ask? Slovenia & Montenegro for Chelsea and Bhutan for Scott). Yet we are so grateful for the circumstances that brought us to this mystical place. Not only was it really fun to send people birthday texts that said “Happy Birthday from Transylvania (insert Dracula emoji)” but Transylvania actually happened to be an incredibly gorgeous place! The countryside was full of misty rolling green hills and trees that appeared to be painted by watercolor. There were castles every direction you turned and the history of the country is absolutely fascinating!

We know Romania has much more to offer and we look forward to coming back in the future. For now, here are our favorite things we saw and did in Transylvania…

1. Training through the Countryside We spent 20+ hours on Romanian trains (including one overnight, that for whatever reason made us giddy like kids on Christmas). Prior to leaving on this trip we talked about how we wanted to do take a lot of trains because it is a great (and inexpensive) way to see a country and it forces us to slow down. No Internet is a reason to write, reflect, read and simply be… something that’s nice to force every once in a while these days! Unfortunately in South America, there weren’t as many trains as we had hoped, so we were excited to get to a place where we can rail from town to town. Never at home would we opt for the 12-hour journey over the 2-hour, but out here we prefer it.

2. The Cave Restaurants and Bars In all of the towns we visited, there were these cool underground cave-like restaurants and bars. It felt so “Transylvania” to sit, enjoy local food and sip deep dark red wine by candlelight! 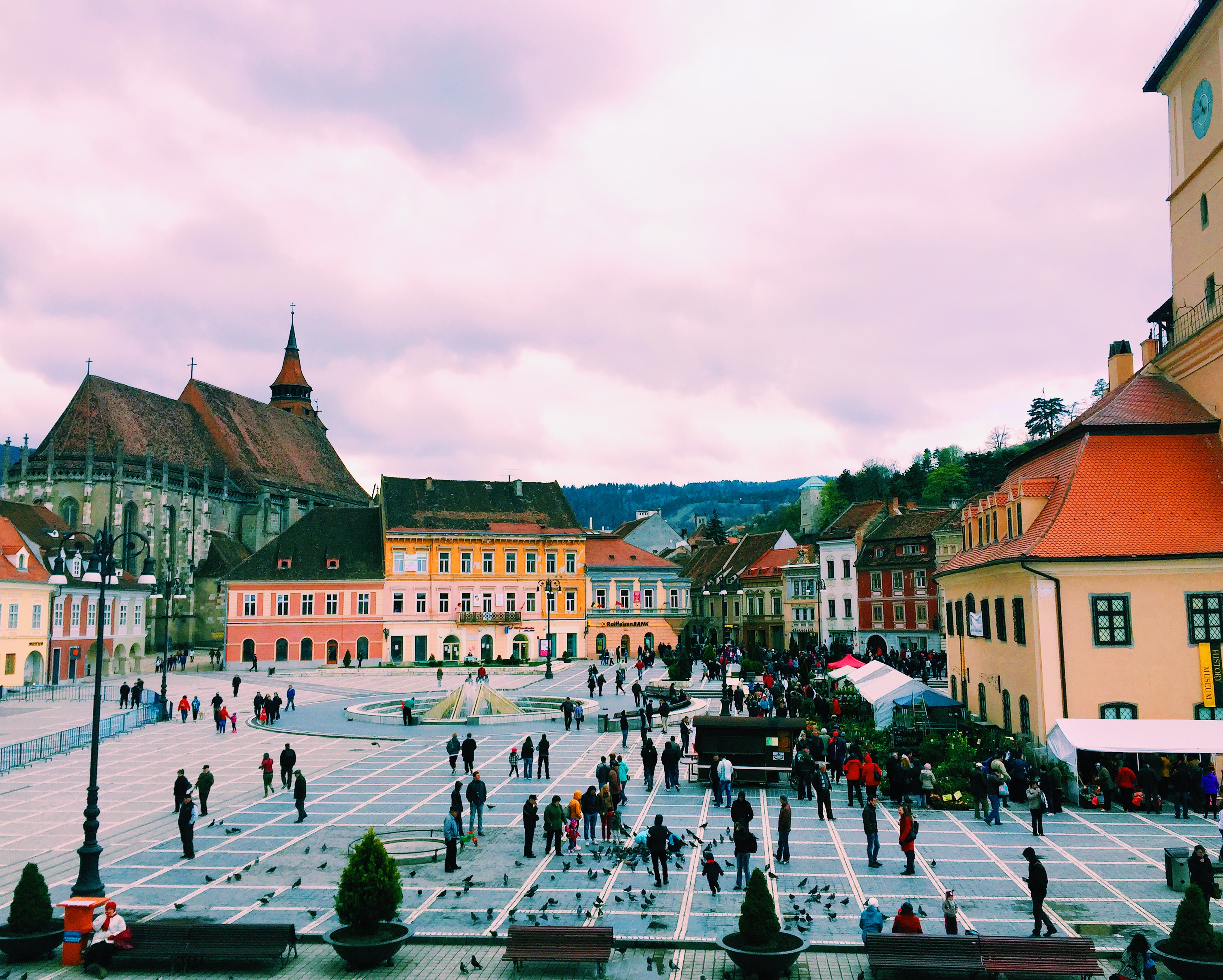 We made Brasov our home base during our time in Transylvania, but also visited Sighisoara and Sibiu.

Brasov had a small town feel and we rented an Airbnb that had a balcony overlooking the main square. We were happy with our choice of Brasov as home because even though it is a city, there is also some nature surrounding the town. What you don’t see (or hear) in the above pic are the dozen workers jacker hammering away on the cobble stone right below our room, starting at 7am sharp each morning. But with a view like this, we weren’t complaining. 🙂 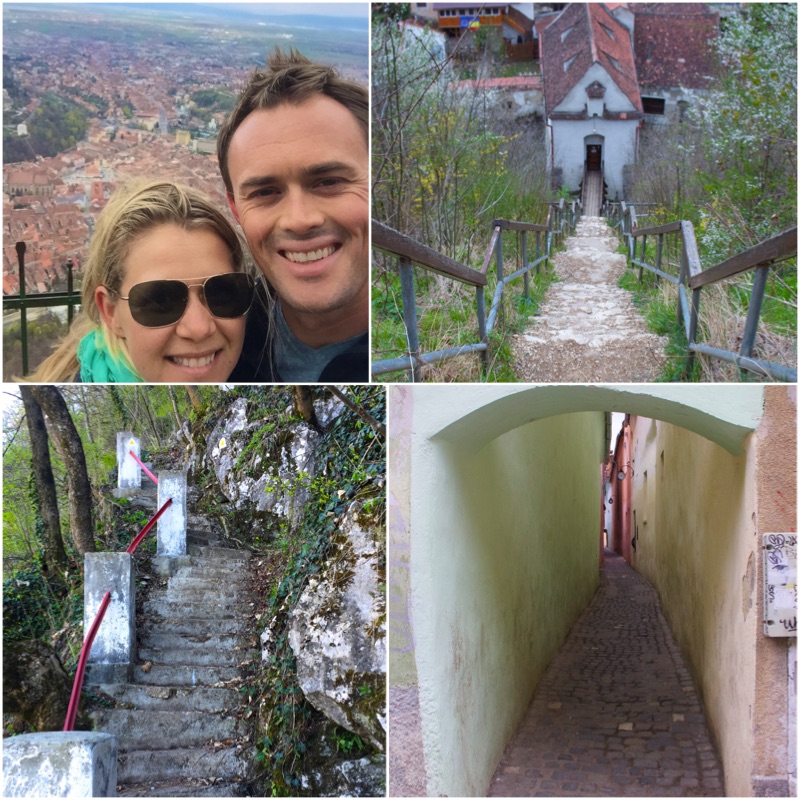 There are endless hiking options around town and throughout Transylvania, and in our backyard we were able to hike very cool sets of stairs up to the top of Mt. Tampa and to two medieval towers – all that had great views looking down over the city center (you can see the town square where our apartment was, right above and to the left of Chelsea’s head in upper left picture). Oh, and Brasov also happens to be home to the narrowest street in Europe! 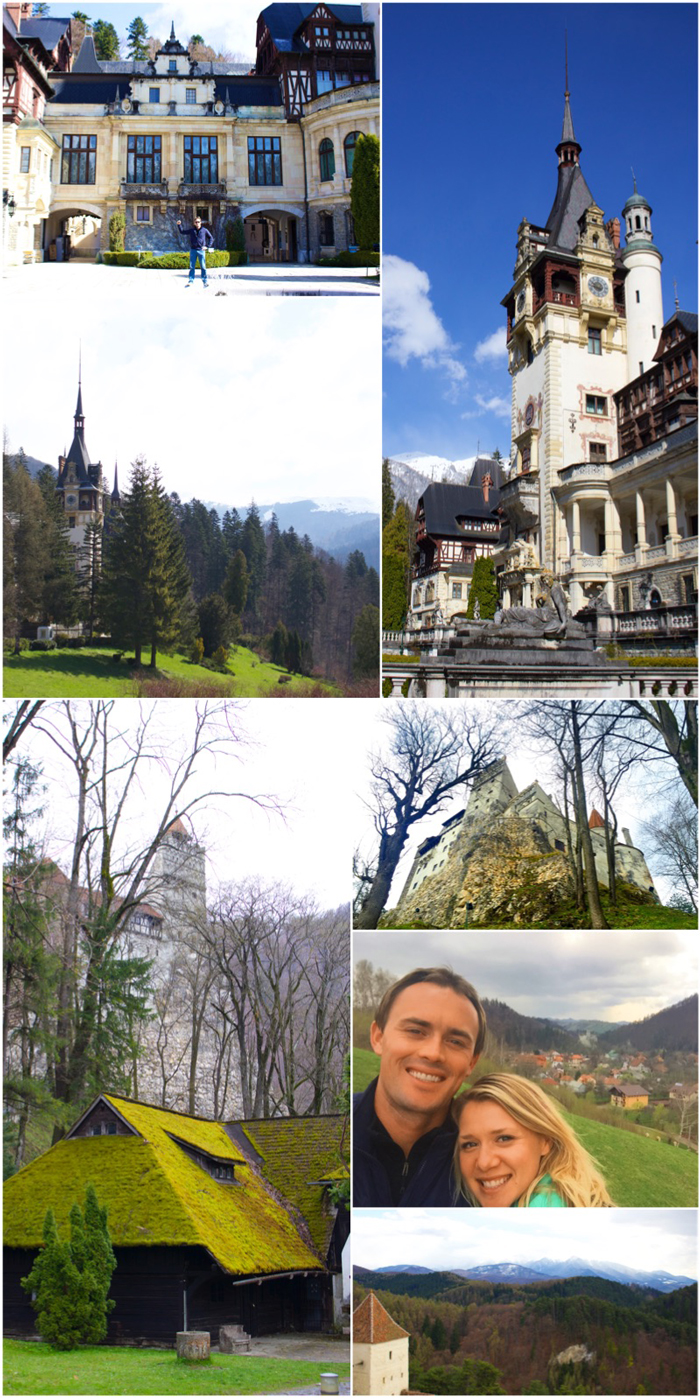 We learned a lot about Romanian history, Vlad the Impaler, his gruesome execution style and Romania’s association with Dracula (seems to be a little more fiction than fact involved when it comes to vampires around these parts). During a day tour we visited several castles, including what is known as Dracula’s castle (aka Bran Castle)…

…and saw even more of the beautiful countryside, including a stop in the snow. Good thing we were prepared with snow gear – aka Tom’s as our ‘snow shoes’! Our “avoid winter” packing strategy hasn’t been quite as seamless as planned, especially given our unexpected diversion to Eastern Europe. You should have seen us during the free walking tour we found in Brasov, which met at 6pm, right as it was hitting about 38 degrees F and the rain and mild snow were starting to fall. The tour and guide were both amazing though – highly recommended! After leaving Brasov, we took the train to the small hilltop town of Sighisoara for a night. As soon as we got off the train Scott happily said, “Ahhh, it’s so quiet here.” And sleepy it was – the town is simply adorable! It’s cobblestone streets led you down narrow colorful alleys and into the town’s one main square. We even wandered into the cemetery on a morning run… and were very thankful the sun was already up!!! We love small little towns like this one and even though there wasn’t much “to-do” we most certainly could have stayed a bit longer. 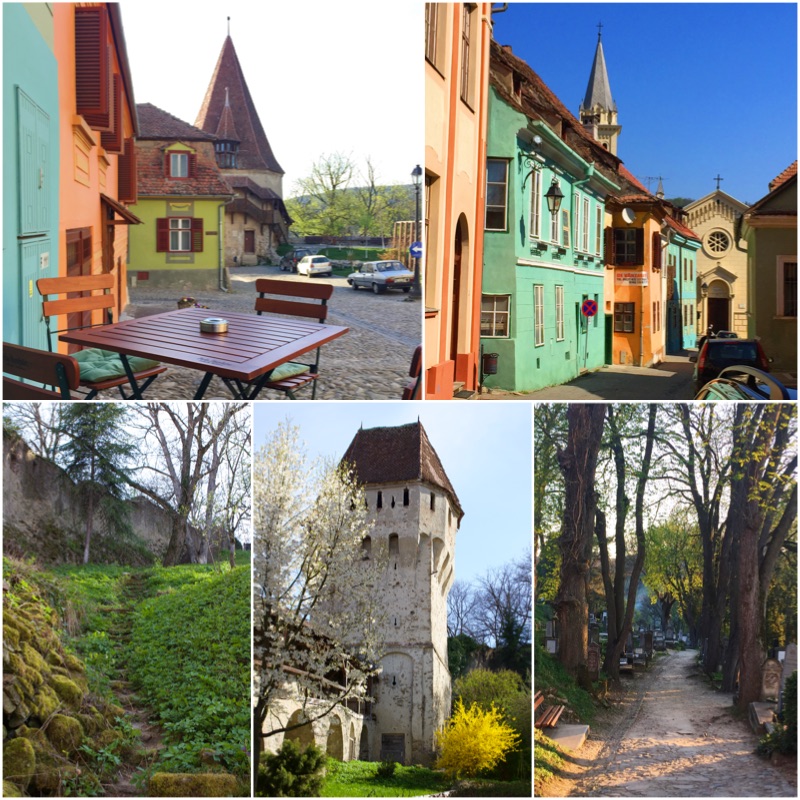 But next it was off to Sibiu, as that’s where our train to Bulgaria was departing. Sibiu is another main hub for exploring Transylvania, but for us it was just a one-night stay and stepping stone to Bulgaria. It’s a bigger town with more going on than Brasov, but in our opinion, it lacks the nature you get when staying in Brasov. 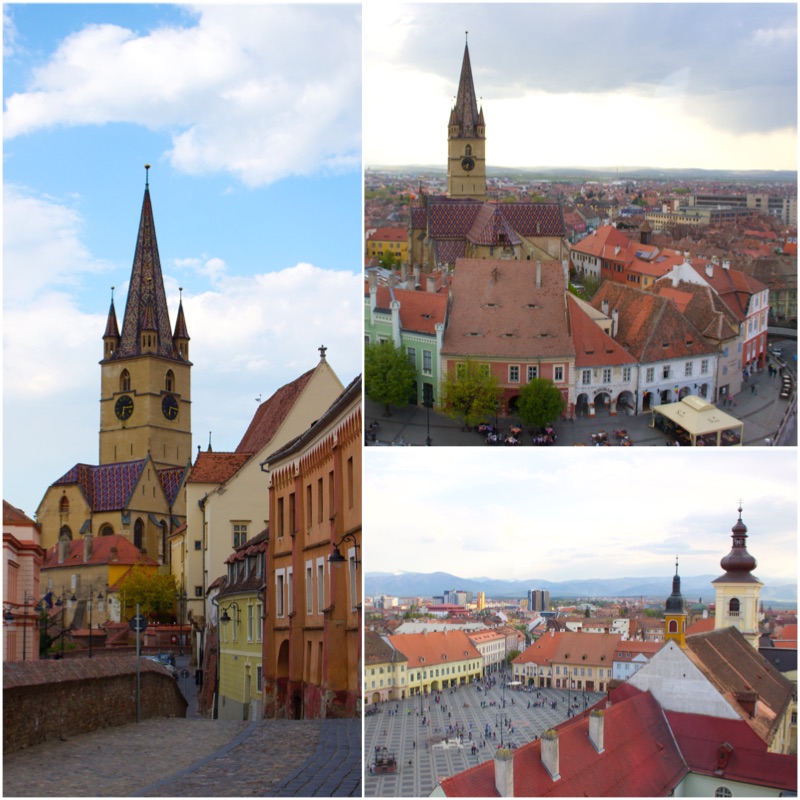 But what it lacks in greenery, it most certainly makes up for in sunsets. We caught what we decided was our #1 sunset of the entire year so far. It’s tough to explain but there is something really magical about church bells ringing & live music playing all while watching a picture perfect sunset over a $2.00 local glass of Romanian wine! Our stay here was short but filled with beauty… 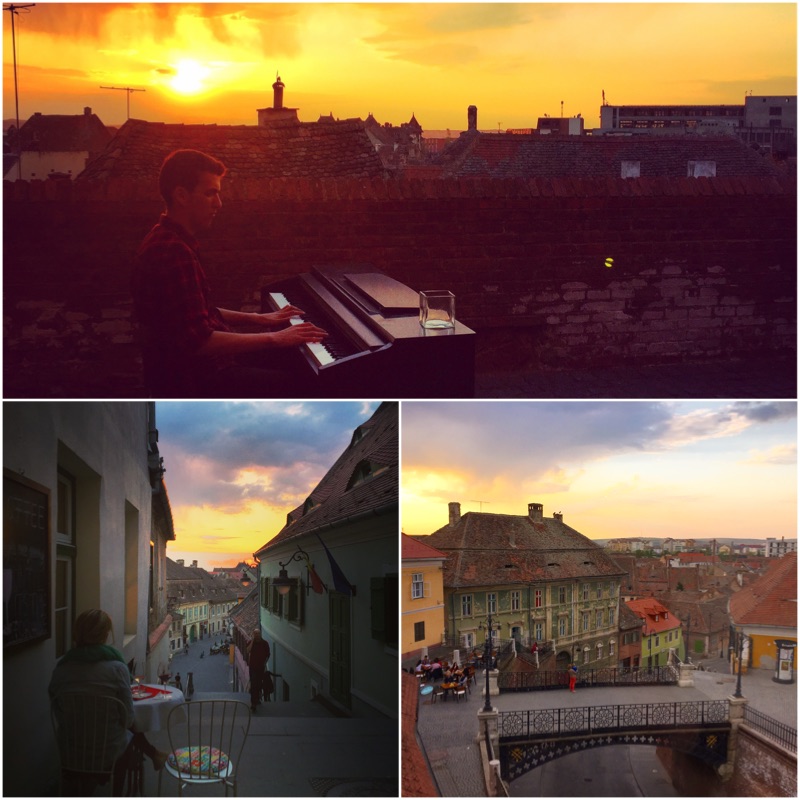 4. The Interesting People we Met We met some fascinating new traveling friends during our time in Romania – makes sense given the people you meet are either avoiding the Schengen or out exploring the lesser known parts of Europe.

On our hike up to Mt. Tampa, we happened to cross paths with Darren of Bicycle Touring Pro, who has been cycling his way around the world for 15 years. We also enjoyed lunch with Mike and Sophie of Relaxed Pace, who are traveling by van (which they converted into a low-impact sustainable home) through the U.K., Europe and Africa for eight months. You can’t make this stuff up – at home we never seem to cross paths with stories like these, yet on the road they start to become normal.

Travel always finds a way of welcoming a new level of possibility, and that is for sure one of our favorite things about an adventure like this.

Giddy to have randomly ended up in Transylvania, of all places. And slightly lonely and homesick, which is probably a combination of having been with so many friends the month before and then arriving to Brasov and the first two dinner restaurants having exactly zero other patrons in them. Apparently the freezing weather quiets Transylvania down a bit. But after a few days exploring, the weather and the energy of the town warmed up a lot, and we left inspired by the people we met and a whole world we’d never expected to experience.

Ending up in unplanned places, and the look on Chelsea’s face when a man pounded on our train door at midnight yelling “passport control!” somewhere along the Hungarian/Romanian border. And then when he did it again an hour later.

Now we’re off to Bulgaria, after logging in a lot more train time.

As always, if you’ve been where we’re heading, we happily welcome any suggestions. Just hit reply or leave a comment.